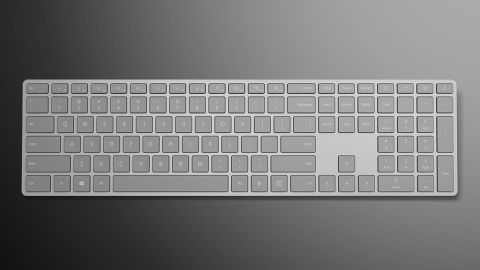 Microsoft's Modern Keyboard with Fingerprint ID is slick, stylish and has one of the best standard membrane keyboards we've tested, with fingerprint scanning functionality that works flawlessly.

Microsoft has been producing PC accessories such as keyboards and mice for decades, but now that it’s expanded into the PC-making business, the tech giant has grown the desire to maintain some design consistency between those peripherals and its core Surface products – and in the case of the new Modern Keyboard with Fingerprint ID, the Surface Studio in particular, which it seems destined to accompany.

However, if you’re after a keyboard that exudes quality and high-end functionality, the Modern Keyboard makes a pretty good argument for spending a bit more to get a bit more.

With its sleek aluminium frame and flat, squared keys with rounded corners, the new Modern Keyboard is about as classy as keyboards get and has more than a passing resemblance to Apple’s own Magic Keyboard design.

It also adds in a fingerprint scanner, however, which has been subtly and tastefully included in a way that doesn’t draw attention to itself, and what Microsoft has achieved here is a simple and nearly faultless design with no obvious areas of improvement.

The keys have a matte finish, avoiding the cheap, shiny look that many other keyboards tend to have, and it also feels like the plastic they’re made of is slightly thicker, in turn giving the keyboard a sense of high-end tactility.

The Modern Keyboard’s rear is propped up by a rounded plastic bar with rubberized strips on the either side. This helps to protect both your keyboard and desk from scratches, while also preventing it from sliding too easily.

At the top of the keyboard, you’ll find a micro-USB port for pairing (the initial setup process calls for the keyboard to be momentarily plugged in to your PC), as well as recharging the battery when needed. To the far right of the USB port, you’ll also find a hardwired on/off switch.

It's also a standard full-sized keyboard with full number pad, so it'll please those users who work with numbers on a daily basis.

There's also a small bank of four unique buttons in the top right corner of the Modern Keyboard (right above that numpad), where you'll find dedicated keys for opening the calculator app, minimizing and reopening your last active window, opening the Windows Action Center for a quick view of your notifications and settings, and a 'padlock' key that instantly locks your computer.

After extensive typing on the Modern Keyboard, we can say that the keys are comparable to Apple’s Magic Keyboards in use, maybe with a touch more resistance in the spring of each keystroke.

While the keys themselves are physically quite close to the metal slate they’re sitting in, there’s a nice travel distance to them, making the Modern Keyboard quite satisfying to type on. It’s also very clear when your keystrokes have been registered.

However, with that higher price, we’re assuming the real reason many people will pick this one up is because of its inbuilt fingerprint sensor, which lets you to securely login into your desktop PC without having to type out a password or PIN.

Microsoft’s implementation of biometric security on the keyboard is basically flawless, with the sensor itself embedded in a dedicated key (which sits next to the right Alt key, just to the right-side of the Spacebar) that looks just like every other one surrounding it, meaning it’s neatly discrete and doesn’t unnecessarily call attention to itself.

For the sake of added security, fingerprint data is stored on your computer alone, and you can set that up within Windows 10’s account settings.

In our experience, unlocking the computer with a press of the fingerprint key took about half a second. Even if it isn’t completely instantaneous, it’s still a heck of a lot quicker than typing out a whole password.

As this is a wireless keyboard, you should get around four months of usage before you need to recharge which, as we mentioned earlier, can be done from the micro-USB port.

Beautifully designed and smartly realised in terms of its fingerprint unlock functionality, the Modern Keyboard with Fingerprint ID is a triumph in keyboard design — albeit one that’ll likely be too pricey for some buyers.

At $129.99 (AU$209.95 / £124.99), it’s competing with fancier mechanical gaming keyboards, but could be worth it for Windows users who want something that’s slick and discrete — or who’re just sick of typing passwords.