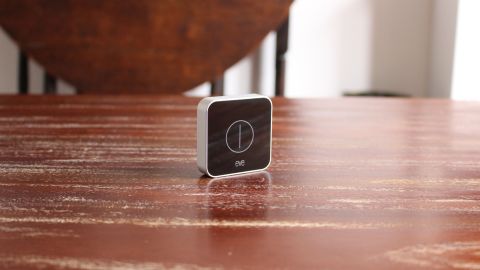 The Elgato Eve button is – by its very nature – a limited device. It’s a button, it turns things on and off. But being a smart button, the amount of things (and variety of things) that it can turn on and off at the same time is impressive. As a HomeKit device, it controls Apple connected products. Elgato has clearly tried to ape Apple’s distinctive style with the Button's design, and almost landed it too.

The smart home is advancing at a steady pace, with our lights, plugs, thermostats, and more all becoming connected. But if you’re still a fan of the feeling of pressing a button to make a device turn on, the experience can ironically leave you feeling quite disconnected to the control of your home.

If you are still a little old fashioned, a smart button may be just the thing for you. With a simple press of a button you can activate and deactivate devices, and even collections of devices that you’ve collated into a ‘Scene’.

The Elgato Eve Button is a smart button created specifically to work with Apple’s HomeKit ecosystem, so if you want a button to work with Amazon’s Alexa or Google Assistant, this isn’t going to meet your needs.

If you’re looking to start you smart home setup and don’t yet have an ecosystem that you’re married to, you could do worse than the HomeKit ecosystem, although it’s worth noting that not all products work with HomeKit, so it’s worth checking out our list of HomeKit devices before committing.

The Elgato Eve Button is available worldwide for $49.93 (£44.99 AU$85). It sits within a wider family of Elgato Eve smart home products, so make sure it's the Button you're putting in your shopping cart.

The Elgato Eve Button is a slick little square, sitting at just 52 x 52 x 13 mm, with a brushed chrome finish. It all feels very Apple, which we think was probably Elgato’s intention.

Unfortunately, it doesn’t quite stick the landing. The main panel that is the ‘pressable’ section of the button is made of a plastic that feels flimsy, that you worry repeated pressing will warp. That plastic panel is an off-black with a power symbol in the middle, sat just above the Eve logo.

For those worried about placing the metal device on a wooden surface like a bedside table, the Eve Button comes with some teeny tiny rubber feet that can attach to the back, making its footing more stable, and reducing the chances of scratching.

What’s slightly disappointing is that there’s no way to attach the button to a wall. In the Elgato Degree there is a small hole in the back so the device can hang off a screw. In the Button’s case there is nothing of the kind, meaning if you want to use it as your lightswitch you can’t place it in the usual spot on the wall.

In an effort to jazz up the what is a very simple device, Elgato provides a number of stickers that you can use to demonstrate what the button actually controls. These include symbols for heating, lights, and more.

For our taste, they look a little cheap when actually attached to the button and there’s no way of indicating which command (there are three, we’ll get into that later) is associated with which product.

Ultimately, if you programmed the button you should know what it does and so don’t need the stickers, and if you didn’t then the stickers don’t really give you any meaningful information aside from that this button does something to whatever the sticker represents.

Setup of the Elgato Eve Button is a little fiddly, and lacks the usual hand-holding that you'd expect from an Apple-connected device.

The first step is incredibly simple; HomeKit devices all have a QR code next to a Home app symbol that you can scan using the – you guessed it – Home app.

What’s fiddly is that if you haven’t yet set up a device as a hub (this can be an iPad, Apple TV or HomePod), the Button will connect, and even allow you to program scenes for the button, but won’t actually work until you’ve set up a device as the hub.

This does also mean that the Button doesn’t connect directly to the devices in your home, so if your hub isn’t connected to your Wi-Fi, the button isn’t either.

The button has three actions, ‘single press’, ‘double press’, and ‘long press’. This allows you to allocate three different actions to the button.

We were slightly frustrated by the fact that you can’t easily set it up so the button has both an ‘on’ and ‘off’ functionality for a single command. This means that if you want to command a light with the button, two of the commands are taken by one device.

There is the option to create an 'if on then turn off' and vice versa, but it is complicated to set up, and definitely not for the smart home novice.

That said, it’s easy to allocate actions to the button, and that includes scenes, so you can collate a group of actions into a single button press.

Once set up, the button works well, and a small LED under the surface of the button indicates when it’s been activated. In our experience, the button didn’t always work on the first try.

With something like a light that’s not a big issue as you can very easily tell that it hasn’t changed. If you’ve allocated a temperature control setting of your thermostat, you may not know for definite if it’s activated, which is more of an issue.

One solution is to make a light change (however small) part of any scene you create, that way you know the scene has activated.

We have a fair amount of gripes with the Elgato Eve Button. In fact, looking back through our review, it does feel like a list of all the things we think are wrong with it, but actually, we quite like it.

There are definitely times when you don’t want to use your phone or voice to control your smart home devices and long for an actual button you can press, and to the Button’s credit, it is a button.

It isn’t perfect, but if you’re in the market for a sleek looking, compact button that you can press to turn your smart-things on and off, it’s not a bad piece of kit.