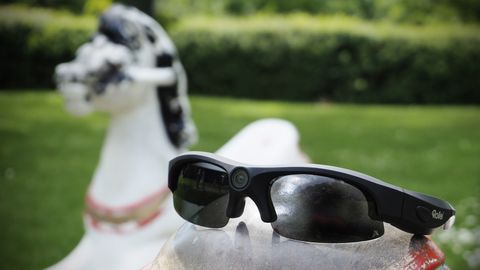 Now you can look cool while shooting HD video

Once on, these glasses are pretty comfortable to wear and they are easy to operate. The footage isn't quite as good as from a GoPro, but it's pretty decent and you don't need any special mounts to get it.

GoPro has become synonymous with extreme sport these days. You rarely see someone leaping from a plane, kayaking down a river or riding a skateboard without one of those little rectangular actioncams being nearby. This desire to record every daring deed is supported by a growing industry in mounts and harnesses that allow a GoPro to be attached to just about anything.

Rollei's Sunglasses Cam 200 takes a simpler approach by having a Full HD camera built in to something that you're probably already used to wearing. And for the days when you want to film and the sun isn't out, there are two clear lenses.

The 135-degree camera built into the bridge of the glasses has a 5Mp sensor that enables Full HD (1920x1080) video to be recorded at 30fps in MOV (H.264) format. Footage is stored on a microSD/SDHC card (up to 32GB is supported) that slots into a port in one of the arms. There's also a built-in battery which is charged via a supplied mini-USB cable and provides enough power for up to around an hour's recording.

Exposure and white balance are controlled automatically, but the default settings (as well as those for saturation, sharpness and quality) can be adjusted via a computer if necessary. It's also possible to set the camera to record 720P video rather than 1080P via a connected computer.

Rollei has used a chunky Oakley-esque design for the Sunglasses Cam 200. As it contains the camera the bridge of the spectacles is bound to be a little bulky, but it's not excessive and the camera is very discrete so the vast majority of passersby are likely to be unaware that they are being filmed. However, I found the bridge sometimes encroached into my field of vision while another tester found that it held the spectacles rather high on his face. The fit of spectacles is a personal matter.

The broad arms have a silky coating that adds grip, but pulls a little on your hair as you don or remove the spectacles. However, once on, they are pretty comfortable and as the glasses are splashproof they can be worn for a wide range of activities.

Optically, the lenses of the glasses are very good with no obvious distortion.

Video recording is started by pressing a button on the right arm (as you wear the glasses) and is confirmed by four beeps. It is stopped by a long press that's confirmed by a single long beep. There's also a blue LED on the inside of the arm that flashes when the camera is recording.

It really couldn't be simpler to operate the Sunglasses Cam 200, but this creates the problem that they are prone to being activated as they are stowed in the supplied case. I have a couple of long sections of black video recorded from the inside of the case. There really needs to be a primary power switch with the button acting as a standby controller.

Any settings adjustments have to be made by connecting the Sunglasses Cam 200 to a computer. There's no software supplied, instead the actioncam is seen as an external drive and settings are changed by editing a stored text file. In addition, the supplied manual outlines how to set the date and time by creating an additional text file with the information written in the required format. It's all simple enough, but it lacks refinement.

There is a theory that wearing a video camera on your head means that your neck and body absorb and wobble and vibration from movement so the footage is smooth. Anyone who has tried shooting with a head-mounted camera will know that this not the case. It is possible to get smooth footage from the Rollei Sunglasses Cam 200, but you need to be stationary during shooting as movies recorded while walking or running results in movies that induce nausea. With a bit of practice, however, it's possible to make fluid panning movements.

In the default settings the Sunglasses Cam 200 produces fairly good looking footage, but it is prone to flare in sunny conditions and chromatic aberration along high contrast edges. Elements also tend to look a little over-sharpened, but the level of detail is good.

Exposure is generally good, erring towards over-exposure in some situations. In addition, dynamic range is fairly limited so skies are prone to burning out on bright days and some tonal gradations look posterized.

Those with long hair may need to tie it back when using the Sunglasses Cam otherwise it can obscure the lens.

While the camera is capable of recording audio, it is quite quiet. Loud enough to hear what's being said, but not loud enough to make a good soundtrack.

While the Rollei Sunglasses Cam 200 doesn't produce videos quite on a par with the GoPro 3+, it is incredibly convenient and easy to use. The footage is of pretty respectable quality, and better than that produced by the average smartphone.

Predictably, the simplicity of operation comes at a cost and settings adjustments can only be made via a computer. This isn't a huge problem provided that the user can forecast the conditions in which they will be shooting. Those heading to the beach or to snowy conditions, for example, will need to increase the exposure prior to arrival.

The spectacle lenses are of good quality and the glasses are comfortable to wear. The tightness of the arms, however, makes putting them on and removing them rather uncomfortable.