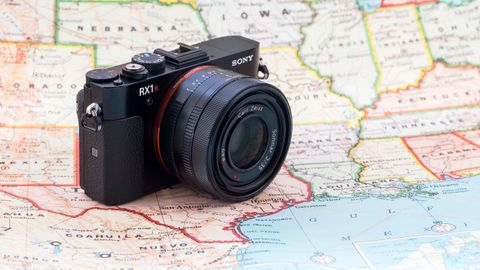 The Sony RX1R II delivers superb image quality in a neat, compact body. The electronic viewfinder is great, though the processing speed and battery life are poor and there's no optical image stabilization.

Sony likes to prove a point with its cameras; namely that Sony can do things that other manufacturers can't. Although this may not necessarily translate into extraordinary sales figures, it paints the picture that Sony is at the forefront of technological innovation.

The original Sony RX1 was announced back in 2012 and was unique in offering of a full-frame sensor in a compact body with a fixed, non-zooming lens. Not too long after, the RX1R was announced, which had much the same specs but with the sensor's anti-aliasing filter removed for increased detail resolution.

Now here we are even further down the line and we have the RX1R II, with yet another Sony innovation. The world's first variable optical low-pass filter (OLPF) is coupled with the same full-frame 42.4 million pixel sensor which can be found in the A7R II compact system camera. In short, this means that you can switch the effects of an OLPF off or on. If you're photographing something which is likely to be prone to moire patterning, like fine patterns or textures, you can use it, but for anything else, such as landscapes or portraits, where detail is key, you can switch it off.

This variable OLPF is a liquid crystal filter which sits in front of the sensor. Different voltages are applied to it depending on the setting you've chosen to use (Hi, Standard or Off). Not only can you choose between these three options, you can also bracket to shoot with all three in quick succession, choosing the best result afterwards. This technology only has an impact on still image shots. It can't be used when recording video – but, knowing Sony, its engineers may think of a way to implement it for moving images before long.

Another new feature is a hybrid autofocusing system comprising 399 phase detection autofocus points and 25 contrast detect points. As the A7R II also has a 399-point hybrid AF system, we can probably assume it's the same system. Sony claims that this AF system brings with it a 30% speed improvement when compared to the RX1R, and slow focusing was something of an issue with the original camera. Another interesting new feature is the ability to record uncompressed 14-bit raw files.

The fixed 35mm f/2 Zeiss lens remains from the original RX1. As the sensor is full frame, that translates directly into 35mm, making it an ideal "walkaround" sort of focal length, and useful for street photograpahy and 'environmental' portrait work. You can use the digital zoom feature to recreate the effect of other focal lengths, but since this essentially cropping the image, you could also do the same thing on your computer at the editing stage.

Outwardly, the RX1R II has a very similar design to its predecessors, but, as with the RX100 III and IV, Sony's engineers have managed to add an electronic viewfinder which retracts into the body when not in use to keep the camera's clean design. Similarly, the rear screen now tilts upwards and downwards to assist when shooting from some awkward angles – and less than 2.5mm has been added to the camera's dimensions to facilitate this. Sony remains reticent to include touch sensitive screens on its higher end products, however.

Although many of the other cameras in Sony's current line-up can do this, the RX1R II is missing the ability to shoot 4K video. While 4K is starting to become the norm, it's likely that the small size of the camera makes it prone to overheating when shooting ultra high resolution videos, so it's understandable that it's been left out. You can record full HD (1080p) videos, though, and it's probably fair to say that the RX1R II is unlikely to be a camera considered by videographers in the first place.

Sadder news is that there's no optical image stabilisation available for stills shooting, although there is digital stabilisation for video. It seems like an unusual decision to leave out OIS considering a 42 million pixel sensor is likely to be very unforgiving of any slight movements (and cause image blur), so we'll examine how this affects handheld shooting speeds.

The closest competitor for the Sony RX1R II is the Leica Q, announced in 2015. The Leica also has a full-frame sensor, a fixed length lens (28mm rather than 35mm) and a compact type body. The RX1 was a very niche product, and the RX1R II continues that tradition, especially at its high price point.

Next Page Build and Handling