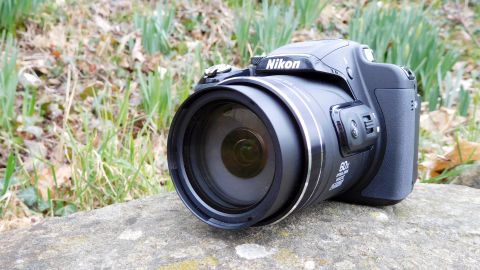 A well performing camera that produces good quality images, especially in favourable conditions. If you're looking for a long zoom or holiday camera, Nikon has produced a good contender. But if you want raw shooting, look at the Canon SX60 instead.

The Nikon P610 is one of the new bridge cameras from Nikon – it replaces the Nikon P600. Its key selling point is a 60x optical zoom which provides you with an equivalent 35mm focal length range of 24-1440mm. There's also a digital zoom available to boost that reach by a further 4x, to an incredible 5760mm.

Inside the camera there's a 16 million pixel back-illuminated CMOS sensor. As it is a bridge camera, the physical size of the sensor is the same as is found in many ordinary compact cameras at 1/2.3 inches.

Other interesting specifications include a 3-inch 921k-dot TFT LCD screen, which is attached via an articulating hinge to allow you to compose from various awkward angles. It also folds completely inwards to protect the screen when not in use.

To accompany that screen, there's a 0.2-inch electronic viewfinder which has a 921k dot resolution and offers a 100% field of view.

Inbuilt Wi-Fi and NFC connectivity is included, allowing you to connect the camera to your phone or tablet to remotely control it or transfer images across for easy sharing on social networks and the like.

Full manual control is available, but the ability to shoot in raw format is not. The camera is capable of shooting at a top sensitivity of ISO 6400, while there's also a Hi1 mode available which allows you to push that up to ISO 12800.

The P610 goes against other similarly lengthy zoomed bridge cameras on the market, such as the Canon SX60 (65x) and the Sony HX60 (60x).

At first glance you could be forgiven for thinking that the P610 is a small DSLR as it has been designed with somebody who enjoys that kind of shooting experience in mind. Although significantly lighter than the average DSLR, it's got a certain heft and bulk which lend it an air of quality.

There's quite a large grip, which is coated with a rubberised texture, making it feel comfortable and secure in the hand. There's an indent on the grip for your middle finger, while your forefinger rests atop the shutter release button on the top of the camera.

You can use either the zoom switch around the shutter release button or another switch on the side of the lens to adjust focal length. Just next to the latter switch is a button, which if you hold it down will zoom out of the scene slightly, handily allowing you to re-find an errant subject. Once you let go of the button, the previous zoom length will be reinstated.

On the back of the camera you'll find the articulating screen and the viewfinder. Happily, Nikon has chosen to include a sensor on the viewfinder which will detect when the camera has been lifted to the eye and therefore switching it on, and the screen off.

This makes the transition between using the two much more natural and less frustrating than on previous models where you had to press a button every time you wanted to switch between the two.

Viewfinder technology has improved significantly in the past few years, and the device found here on the P610 is reasonable to use, offering a clear view of the scene. Although it's not as large as something you might find on a CSC, it's quite a step forward from the tiny, low resolution finders of old.

To quickly switch between the different exposure modes the camera offers, there's a dial on top of the camera. Helpfully, Nikon has included a space on the dial for a group of custom settings, which is useful if you're often shooting one particular type of scene, such as low light.

As mentioned earlier, the camera offers full manual control. In order to alter the aperture, you use the scrolling dial on the back of the camera, while a second dial just above the thumb rest controls the shutter speed. If you're using aperture priority or shutter priority, you'll only be able to use one of these dials at a time. To alter exposure compensation, you'll first need to press the right navigation key and then use the scrolling dial to make changes.

Happily, Nikon has enabled the selection of a particular autofocus point. From the main menu you will need to choose AF area mode > Manual. After this point you simply press the OK button in the centre of the navigational pad and then use the directional keys to the point you want to use. You can also alter the size of the AF point, choosing from spot, normal and wide, which is handy if you're trying to focus on something fine.

The main menu is relatively straightforward, and is organised sensibly. It would have been nice however to see a quick menu which would allow you to quickly access some of the key settings, such as ISO, metering and white balance, without having to enter the menu at all. On the plus side, there is a function menu which can be assigned to one of nine different functions, allowing you to quickly change something important, such as ISO.

Connecting the camera to your phone or tablet via Wi-Fi is very easy. Simply press a dedicated Wi-Fi button and you will see the name of the camera's network which you need to connect to. Once you have joined the network from your phone, launch Nikon's free Wireless Mobile Utility app and from here you can remotely control the camera or transfer photos across. Frustratingly however, you can't change any settings on the P610 from the app, just extend or retract the zoom.