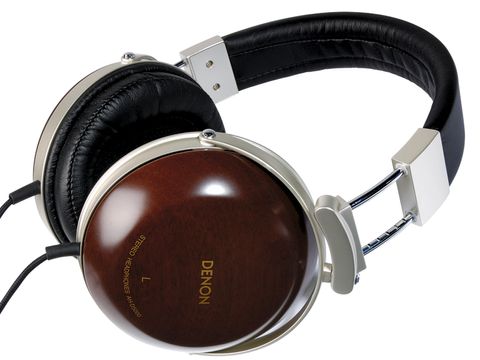 A fine headphone which, while it doesn't quite blow the best open models away, at least competes with them on general sound quality grounds. Comfortable, and with good isolation inward and outward

Denon has plenty of headphones currently on offer: the AH-D5000 is the range-topper.

It's a closed-back model with earcups made of natural wood – the Japanese love natural wood, of course, but apart from its decorative properties it is quite a useful material from an acoustical point of view.

Inside the wood are the drive units, which use a microfibre material to counteract diaphragm resonance. Sensitivity is quite high, aided by the unusually low impedance of 25 ohms – we didn't find anything that had trouble driving it, at least at normal listening levels.

The earpads are covered in leather making this another comfortable headphone suited to long listening spells. Spring force from the headband is quite gentle and pressure on the top of the head is also modest.

The cable is on the thick side, but not too instrusive, and its nylon braid covering does not generate too much friction noise. It uses high-purity copper wire, though in common with most headphone makers, Denon does not say whether the ground wire is common to each channel or separated right behind the jack plug (headphone diehards will soon tell you that the latter sounds better in a far more obvious way than the purity of the copper in the wire).

As a closed-back model, this naturally cuts out a fair bit of external noise. That can lead to a rather unnatural effect, but it's worth noting that Denon seems to have achieved an unusually frequency-independent attenuation of outside noise, which improves the situation considerably.

Historically, closed-back headphones have tended to be less neutral in their balance than
open models, but it doesn't have to be that way and Denon seems to have proved the point pretty conclusively here.

Although the tonality of the D5000 is not completely beyond reproach, it is absolutely on the same general level as many of the competition. There is a little subjective lift in the treble (actually we can't think off-hand of a single Japanese headphone we've heard that doesn't have at least a hint of treble prominence), but otherwise the balance is mostly very even.

That said, the bass seems a little heavy. It's not exactly that it is boosted, but when there is a lot happening at low frequencies it seems slightly plodding and inclined to distract from higher-frequency goings-on.

When the bass is simple, things are happier and we thoroughly enjoyed that old audiophile staple of the 'walking' plucked double-bass line, which invariably seemed full-bodied without excess, tuneful and immaculately timed. It's in dense orchestration and handfuls of low piano chords, that the problems seem to arise.

There is a good deal of detail on offer, too, with clear differentiation of instruments and pretty good stereo imaging. We felt that the Beyer model slightly had the edge in this last department, but Denon gives good lateral definition and about as much depth as one ever gets from headphones.

Voices, as often happens with headphones, show a trace of coloration on consonants, but are very well served in the vowels and remain distinctive in both speech and song.

There seems to be no strong musical preference with the Denon AH-D5000, but we felt that classical styles seem to be just a little better suited to this headphone's very civilised presentation. There's no fear of a little roughness now and again, though!