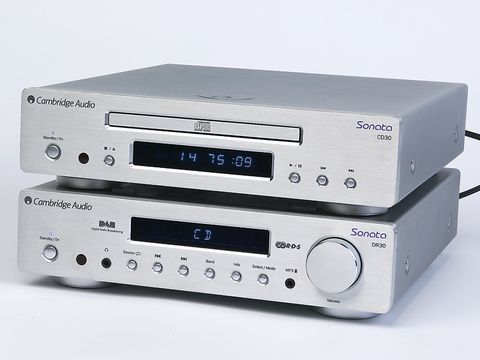 Cambridge Audio's CD player and Receiver are a powerful combination, despite their relatively low cost

An appealing system that offers a fine combination of features and sound in a neat space-saving package, at a truly bargain price

Undeniably, Cambridge Audio dishes up a more than decent range of true affordable products – an important consideration when the purse strings of many consumers are tightening.

Lately, however, offerings from its budget portfolio have tended to be full-width and largely traditional in specifications and features. So, with an eye to modernising both the look and functionality of its budget offerings, Cambridge has recently drawn back the curtains on the Sonata series.

This price range suggests that Cambridge Audio isn't trying to offer the cheapest small-scale sound solution to potential buyers. Indeed, the product literature suggests that sound quality has been given serious consideration.

One might wonder just how clever it's possible to be with a £200 budget, but this is the manufacturer behind the DacMagic, after all – possibly the most praised £220 hi-fi product so far this century.

Although the CD30 doesn't include any of the DacMagic's features like custom digital filtering, it is equipped with a pretty high-spec DAC chip, decent analogue circuitry and a proper audio transport. Additionally, the power supply is a small switch-mode affair and both flavours of digital output are available.

The DR30 comes with a regular analogue power supply with a toroidal transformer, providing the backup for a proper discrete-transistor output stage, mounted on an internal heatsink. Cambridge Audio rates the amp at 40 watts, which chimes with our findings.

Peak power, however, is considerably higher for brief moments, or on one channel at a time. Radio reception in this instance is courtesy of a small DAB/FM module.

Three line-level inputs are included and there's also a dedicated socket for the DD30 dock, while an additional MP3 player input and a headphone output are on the front panel. A record output and subwoofer in/out sockets make up the additional connectivity.

While it's possible to point to the odd specific area of performance where this system falls short of high-end performance, it is still remarkably capable, given the price. What's most surprising is how it generates a real sense of musical scale, complete with striking dynamics, full frequency range and extended images in all directions.

You just don't expect such assurance from budget kit. It's not so much that the equipment is diminutive, as plenty of high-end firms have packaged kit in small cases, it's more that what's inside is simple and low-cost that causes the surprise.

There are limits, though – not least in absolute loudness. Driving some power-hungry speakers, the DR30 was distinctly stretched trying to reproduce peaks in a dynamic orchestral recording, but short of those peaks it still maintained a high standard of both attack and detail.

The lowest bass never quite solidifies in the way the best midrange amps can manage and high treble can be hard and brittle. That said, midrange is very neutral and full of lively little details.

Separating CD30 and DR30 suggests that the two are evenly matched in abilities. The CD player's bass is a little more confident than the amp's, but presentation is generally similar.

The DAB radio module works well and delivers notably better results on FM than some of its kind. Sound is acceptably clean and free from electronic whistles, although it's no match for a dedicated FM tuner.

The DD30 iPod dock works well and seems to get the best out of solid-state music, though the system is revealing enough to make data-compressed music obvious.