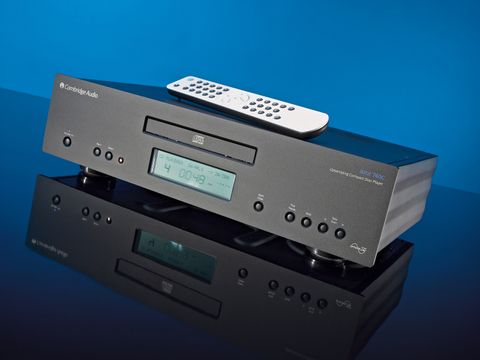 The display is hard to miss, but won't be to everyone's taste

Even if you've no use for the digital inputs, this is still a must-hear option in the admittedly busy £500 market

Twice now we've had the pleasure of reviewing Cambridge Audio's high-tech Azur 840C CD player. At £750, it offers superb value. So what might we say about this newcomer, which at a mere £500 appears to equal the 840C pretty much feature for feature?

Like the 840C, it employs some nifty digital signal processing courtesy of Anagram Technologies to effect upsampling to 384kHz. There's nothing magic about upsampling, but it is a useful technique; and the higher the better, because it makes the analogue filtering that follows less of a headache. In addition, correctly done, it can be a useful extra protective measure against the transfer of jitter from the transport to the analogue output.

One difference between the 840C and 740C models is the DAC chip, which is in this case a slightly cheaper model from Wolfson. As with the Analog Devices chip used in the 840C, it is configured to bypass its internal oversampling filter and despite the slightly lower specification, it's likely to exceed the performance of most other parts of the record/replay chain. Another difference is that the 740C has no balanced output, and we gather that the analogue filter is slightly simpler.

That still leaves a lot in common. Significantly, the 740C also features two digital inputs, making it usable as a DAC with the potential to enhance the sound quality of any device featuring digital output at any of the standard frequencies. Like all the Azur range, it's neatly put together in an all-metal case and, apart from the slightly old-fashioned display, looks very much the upmarket business in either black or silver.

Cambridge Audio will have to excuse us if we don't say that this player wipes the floor with the competition; it doesn't, but that's not because it's badly - or indeed, at all - lacking in any area. We've seen many £500-ish players in the last few years that put out a highly admirable performance, and this merely adds to their number. But if pushed, we'd certainly place it at (or very close to) the front of the pack.

Comparing notes from our experiences with the 840C, we found plenty of common ground, but were most struck by the 740C's agility and rapidity of response to changes in dynamics and musical textures. This in turn is evidently due to excellent tonal neutrality, and ironically that may even be an area where it slightly excels the 840C, though there's little in it. In absolute terms, though, this is a very neutral player that combines bass weight, treble extension and an absence of midrange coloration.

Where it does seem to lag behind the 840C - by a small margin - is in stereo image depth. We had no concerns about this with the dearer player, but the 740C does pull images a little forward compared to the best references we've heard. As with the 840C, instruments are not always as clearly defined in space as they can be by the very best players, but nothing at this price can embarrass the 740C in this area.

Once more like its bigger brother, the attention to detail and accuracy may seem a touch bland if you're in favour a spiced-up approach to hi-fi. Overall, though, this is an excellent CD player that should be of interest to anyone who appreciates the finer things... bar those who just like spending money! Bearing in mind that as an add-on DAC it can already justify itself if you've DAB, MD and so on, it's one of the most self-recommending bits of kit we've enjoyed lately.