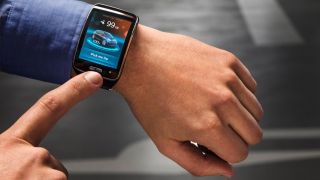 Are you a big fan of the BMW brand? Next year, you'll be able to decorate your wrist with a BMW themed smartwatch for the very first time.

Confirmed by BMW and the Fossil Group today, the two companies are set to collaborate on development of a new range of watches and smartwatches sporting the former's brand.

That's currently all we know with the design and specs currently unclear (that picture above is a concept image for an old BMW self-driving car idea) plus there's no clear release date yet either.

Fossil Group designs smartwatches for licensed brands such as Diesel, Emporio Armiani, Kate Spade and Michael Kors already, so this will just add to the already large list of brands the company develops smart wristwear for.

Perhaps cheaper than a car?

"BMW is one of the most iconic brands in the world,” said Kosta Kartsotis, chairman and chief executive officer of Fossil Group.

“We look forward to bringing our watch design expertise and smartwatch capabilities to BMW enthusiasts around the world.”

While the exact release date is unclear, we know that both BMW and Fossil Group will be distributing the watches. Plus it's a deal between the two companies to collaborate until 2023, so it may be we see various generations of smartwatch devices over the next four years.

Back in April 2018, Fossil Group announced it will be making a Puma branded smartwatch as well with it set to come out at some point in 2019.