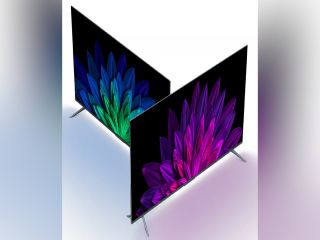 Xiaomi, on Tuesday, introduced the new range of its flagship television series in China. The Mi TV 5 and Mi TV 5 Pro were announced in China and come in three sizes each-- 55-inch, 65-inch, and 75-inch. Alongside this, the Chinese electronics maker also launched Mi CC9 Pro with a 108MP camera and Mi Watch.

The new Mi TV 5 series measures 5.9mm at its thinnest point, making it one of the slimmest televisions to exist. For comparison, the iPhone 11 has a thickness of 8.1mm!

Xiaomi has also revealed that the bezels on the Mi TV 5 range are around 47% narrower than the previous generation Mi TV 4. The side bezels now measure 1.8mm, which gives a more extensive viewing estate to the television.

Both the models have an aluminum construction and feature a screw-less design, which increases the elegance quotient of these televisions.

Mi TV 5 Pro features a 4K Quantum Dot QLED panel that supports HDR10+, MEMC (motion estimation and motion compensation), is 8K ready, and can reproduce up to 108% NTSC color gamut. It is powered by an Amlogic T972 chipset, which is 63% more powerful than the previous generation and is paired with 4GB RAM and 64GB storage.

Xiaomi's regular Mi TV 5 range doesn't ship with Quantum Dot panel and instead has a 4K LCD screen without MEMC and HDR10+ support. Moreover, the panel can only reproduce up to 85% of the NTSC color gamut. These models come with 3GB RAM and 32GB storage.

The 55-inch and 65-inch models of the Mi TV 5 and Mi TV 5 Pro go on sale in China starting November 11. There's no word about their release in India as of now.