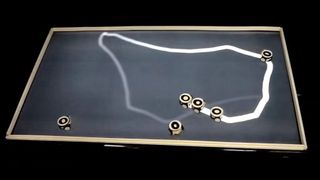 The ability of swarms of insects to act collectively baffled entomologists for centuries, before it was discovered that they use complex chemicals - known as pheromones - to signal to other members of their species.

Some roboticists have theorised that swarms of autonomous robots could be directed to collectively in the same way. To that end, researchers have created artificial pheromones using both chemical and physical techniques, but to date none of their approaches have been particularly effective.

Now, however, the University of Lincoln's school of computer science is claiming a breakthrough. Farshad Arvin, a PhD researcher there, has used low-cost, off-the-shelf hardware to create digital pheromones out of light.

Here's how it works. Robots moving across a screen are equipped with a pair of light sensors as 'antennae'. When a visual trail is displayed on the screen, the robot detects where it is and moves towards it - just like an insect would.

"The system means that we can produce precise and high resolution trails, control the diffusion, evaporation and density of the pheromones, and encode individual pheromones using different colours," said Arvin, who described the technique in a scientific paper, presented at the International Conference on Intelligent Robots and Systems in Hamburg.

"The interaction of different pheromones can amplify or suppress each other, resulting in complex swarm behaviours, just as they do in the natural world."