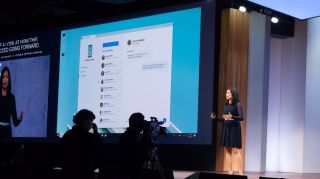 We’ve been wondering what Microsoft will call the next major update to Windows 10, which currently has the codename Redstone 5, and a new rumor suggests it will be called Windows 10 October 2018 Update.

The rumor comes courtesy of well-known Microsoft leaker WalkingCat, who posted the name on Twitter.

WalkingCat has a decent track record when it comes to leaking Microsoft’s plans, which lends this rumor extra credence.

The name also hints at the date of the new update. The April 2018 Update just made it out in April, after a number of delays.

Hopefully the release of Windows 10 October 2018 Update, or whatever it ends up being called, will go smoother.

As with other major updates to the operating system, Windows 10 October 2018 Update will bring a number of new features to Windows 10, including an upgraded look thanks to Fluent Design, and improvements to Microsoft Edge.