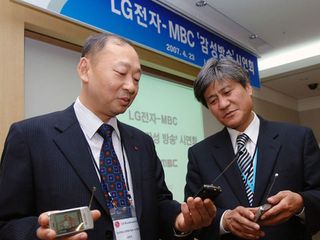 LG hopes its vibrating televisions will take off outside Korea.

Those two Korean gentlemen in the photograph are not just watching television on mobile phones - they're actually feeling it. That's because they're from LG Electronics and partner MBC and are checking out the new force-feedback TV standard that's about to take the entire world by storm.

The so-called 3D broadcasting is so simple in concept it's surprising it hasn't happened before - take key moments from a TV show and send a simultaneous signal to make the phone vibrate.

The examples given by LG include a thud as a ball hits the back of the net in football or an in-hand rumble to match whatever onscreen violence is unfolding.

Ambitious as ever, LG says it hopes the new technology will not be limited to Korea and that it is feasible to add the rumble signals to any kind of mobile TV broadcast, whatever the country. Whether or not hardware makers will upgrade their devices to accommodate is, of course, another matter.