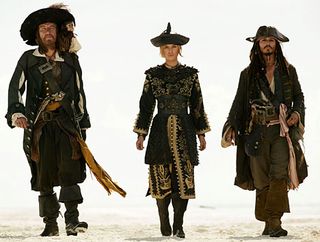 Yes, we do realise Keira Knightley isn't in the movie any more

An analyst has spoken out against Hollywood's pre-occupation with 3D movies after blockbuster Pirates of the Caribbean: On Stranger Tides' opening 3D takings were relatively low.

This, argues Greenfield, indicates that "US consumers are increasingly rejecting 3D movies" and the over-reliance on the 3D gimmick could ultimately end up hurting the industry. Savvy?

Greenfield argues that the 3D fatigue comes down to two things; pricing and glasses.

The pricing issue is obvious, with some screens charging almost double for the three dimensional pleasure; in Pirates' case, Greenfield believes that cinemas dedicated too many 3D screens to the movie and not enough 2D ones.

With more 2D screenings, Depp and co could have enjoyed higher takings from the seeming majority who choose not to endure the eye-popping 3D.

The need for glasses has always been an issue too – at first, it was a novelty to strap the over-sized plastic slabs to your face, but now it's a bit uncomfortable and tiresome, particularly for children Greenfield says.

Dial down the 3D

He concludes with some advice to Hollywood: "Make fewer 3D films in 2012" and "Focus on making consumer-desirable films rather than worrying about the technology."

Although very much focused on the US market, Greenfield concedes that 'foreign' consumers are still lapping up the 3D milk.

Indeed, Jeremy Playle, Sales Director at Digital Cinema Media (DCM), told TechRadar, "Despite premium ticket prices, 3D films continue to draw larger crowds than their 2D versions. As we have seen with Pirates of the Caribbean 4, people are voting with their feet with UK admissions to 3D screenings 34% higher than 2D screenings."

He also takes issue with the idea that children are loathe to don the 3D specs:

"Kids in particular love 3D films.I know this anecdotally from my own children but also from research by the CAA which shows 61% of children cinemagoers (under 15s) are more likely to see a film at the cinema if shown in 3D, that's 37% more likely than the average UK cinemagoer."

So, in the UK at least there's still a real appetite for 3D film; but if Hollywood takes note of the figures and heeds the analyst's warning, we could see fewer 3D movies coming out just as the consumer market starts investing in 3D TVs.