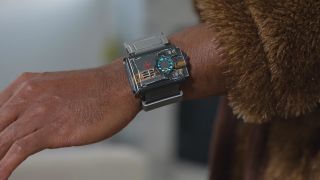 The official Force Band accessory is the most Jedi-like way of controlling the Sphero BB-8 toy, and now its maker has added some extra functionality to the wearable that gives you even more power from your wrist.

The Force Band now plugs straight into the IFTTT (If This Then That) platform, which means you can use it to control all kinds of smart home kit, from Philips Hue lights to Belkin's automatic power switches.

In fact you can use the Force Band IFTTT functionality to link it to all kinds of services, from Gmail to Twitter, but it's perhaps the smart home controls that make the most sense. IFTTT has published a few example applets on the channel page.

Sphero has put together a new video for the occasion, demonstrating how you can use the wearable together with IFTTT to act like a Jedi in your own home - by switching on the smart coffee maker, for example. Chewbacca outfit optional.

If you've yet to discover the wonders of IFTTT, then we'd recommend digging in and having a look - the site and its associated mobile apps let you link all kinds of different apps and services together for free.