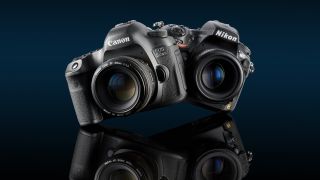 There was a time when full-frame DLSRs were a luxury item limited to professional photographers. A shift occurred when economies of scale kicked in and the costs of production began to fall, bringing lower priced models in to the market. This paved the way for amateurs and enthusiasts to have the same access to high end hardware.

We should also mention full-frame mirrorless cameras. These aren't strictly DSLRs, but the Sony A7 series cameras like the brilliant Alpha A7R II are particularly interesting for those who need to shoot video as well.

Here are the best full-frame DSLRs you can buy right now in India.

The most complete DSLR

The latest addition to this list is the newly launched Nikon D850 full-frame camera.

The camera is aimed at photographers involved in nature, events, fashion and wedding photography and its wide ISO range of 64 to 25600 allows them to shoot continuously in different lighting conditions.

Nikon’s EXPEED 5 image processor sits at the heart of the camera, which promises to offer uncompromised performance across still and video shooting.

It comes with 45.7 MP BSI CMOS sensor that promises to keep a balance of high-speed and impressive resolution when combined with up to 9-fps continuous shooting mode.

The LiveView focusing speeds could be better and the SnapBridge connectivity is nothing to write home about, but this camera still manages to outshine the rest.

One thing that might disappoint some users is the absence of 4K capability. But, to cover this up, the camera has a 4K Time-Lapse function which fuses the images to create a 4K video.

Taking the fight to Canon and Nikon

It comes with 42.2-megapixel BSI CMOS sensor and BIONZ X image processor which promises to increase the processing speed up to 1.8 times faster than its predecessor.

In addition to this, the camera can shoot up to 10fps.  If Nikon thought it was going to have things all its own way with the D850, it should think again.

For now, the Alpha A7R III is not only the most well-rounded mirrorless camera you can buy, but one of the best cameras out there.

One of the most complete DSLRs we've seen

Canon's EOS 5D series of cameras has a rich heritage – the original EOS 5D bought full-frame photography to the masses, while the Mark II unleashed Full HD video capture for the first time on a DSLR, starting a whole new genre of DSLR movie-making.

That's not forgetting the Mark III, which perhaps, was not as groundbreaking as the two models before it, became a firm favourite among photographers.

The 5D Mark IV pretty much tweaks and improves on everything the Mark III had to offer. This includes a brilliant new 30.4MP sensor that delivers pin-sharp results and an advanced 61-point AF system that's incredibly sophisticated. It even has pro-spec performance, 4K video and some very polished handling.

Put this all together, along with a host of other features and it all combines to make the EOS 5D Mark IV one of the best DSLRs we've seen.

It may have recently been ousted from the top spot, but this is still a terrific choice

It might be getting a bit old now (it was launched back in the summer of 2014), but the Nikon D810 is still one of the best DSLRs around. Not to mention that it manages to give the EOS 5D Mark IV a good run for its money.

Images from Nikon's 36.3 megapixel monster are bursting with detail, while its 1200-shot battery life puts the 50.6MP EOS 5DS in the shade.

We're also fans of the D810's clarity micro-contrast adjustment with its video-friendly 'flat mode' for maximum dynamic range. The 51-point AF system copes well with tricky focusing situations, mainly because both the AF and metering systems are taken from the now ex-range-topping Nikon D4S.

Proof that more can mean better: The 5DS sets a new standard for DSLR photography

With 50.6 million effective pixels, the Canon EOS 5DS is by far the highest resolution full-frame DSLR on the market today.

The same goes for the 5DS R, which is identical to the 5DS, but features an anti-aliasing cancellation filter over the sensor to help resolve a little more detail should you need it.

Pixel-packed sensors can be compromised, but not here. Image quality is superb, as you'd expect, with fantastic detail, well controlled noise and good dynamic range. This makes it the ideal choice for the landscape or studio photographer.

The EOS 5DS is now the benchmark for full-frame image quality, but it's not quite perfect. There's no Wi-Fi or 4K video recording, and huge image file sizes necessitate decent memory cards and a fast computer.

A full frame DSLR packed with features for a reasonable price? Yes please

Can't quite stretch to one of our top options? Then the Nikon D750 should be at the top of your list.

The D750 still packs a cracking 24.3MP sensor and is as weatherproof as the D810, yet it's roughly 25% cheaper. Compared to its baby brother, the D610, the D750 has a superior 51-point AF system, as well as more advanced metering and video capabilities.

Its continuous shooting speed of 6.5fps isn't quite as fast as some may have hoped for, but on the whole the Nikon D750 is a well-rounded, well-priced choice for enthusiast photographers.

The D5 is Nikon's latest flagship DSLR, and it certainly doesn't disappoint. 20.8 megapixels might seem a bit stingy, but it means the D5 can shoot at 12fps continuous shooting, while the extended ISO range of ISO 3,280,000 has never been seen before in a camera.

The autofocus system - with a coverage of 173 auto-focus (AF) points (99 of which are cross-type), the sophistication and speed of the AF is staggering.

However, the ability to shoot 4K video is restricted to three minutes but putting that aside, the D5 is a phenomenal camera that's used by professionals the world over.