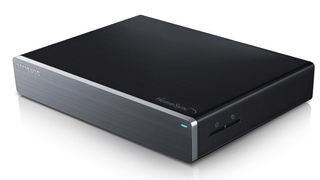 The new media streamer, which will compete directly against Apple TV, will serve up a host of popular video on demand services through full access to the Google Play store.

Naturally, that also means that the best Android games, music services and online portals will be available on the big screen TV, at full 1080p HD resolution, where available.

The HomeSync box is not, however, a Google TV branded product.

As well as freer access to a greater range of apps than Apple TV, Samsung's HomeSync will also have another leg-up on Cupertino's favourite "hobby project".

It has a 1TB HDD meaning users can store a host of their favourite media content on the device, with up to eight members of the household able to set up user accounts for private or shared storage.

The second and third generation Apple TV products ditched local storage for a streaming-only solution, which has so far served the company well.

Like Apple TV, users will be also able to control the box from a smartphone app.

Other top-line HomeSync specs include a 1.7GHz dual-core CPU, while there's 1GB of RAM to keep things ticking over smoothly.

The device will go on sale in April in the US initially, before a global expansion later in the year.

Pricing has not yet been announced.