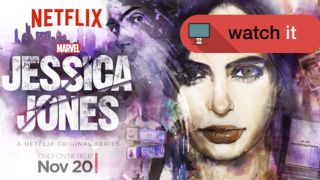 "The way I see it, most have got both [good and bad] going on. It just depends on what wins on that day," says Luke Cage three episodes into the sublime Netflix series Marvel's Jessica Jones.

And it is that battle and the whole gamut of humanity between the two extremes that elevates the series beyond not just every other Marvel TV property to date, but also into the best shows of the year.

The Marvel in the title, and the presence on Netflix rather than HBO or AMC, might leave this series pigeonholed as niche – but this is a TV show worth seeking out.

At first look, you might be wondering just why Netflix has taken one of the obscure, left-field characters from the huge catalogue of Marvel super-hero properties and produced one of its most pivotal TV shows of all time.

The critical acclaim that deservedly met the more adult hero stylings of Daredevil, leaving behind the dreadful Ben Affleck movie of the same name, gave Netflix the kind of momentum it had been craving from a potentially risky big-bucks deal with the comic book giants.

But following that up was going to take something a little bit different, something more edgy and not just a rehash of the gritty opener, and Jessica Jones fit the bill in the way perhaps no other comic book hero could.

Penned by Brian Michael Bendis, Alias – the comic that introduced Jessica Jones – was written for an adult audience that had grown up with comic books, but were perhaps seeking a less black and white universe.

Sex, violence and heroes that were painfully human, the book was a critical success, but not enough to catapult the noir protagonist into the mainstream in the way her Avengers brethren (or even the B list) managed.

And yet, as anyone who ever read the graphic novel would testify, this was a story that slotted beautifully into the modern TV landscape – a world of Sopranos, Walking Dead and Game of Thrones where nuance, sexuality and consequence bring such colour to our fictional universes.

The best compliment that you can give Jessica Jones from Netflix is that it entirely understands what made the source material so attractive: the noir stylings of a damaged hero, the heroism in not using powers, the consequences of actions and a sociopathic, and genuinely creepy villain.

David Tennant is truly remarkable as Kilgrave, perhaps the most genuinely disturbing villain ever to make it through to Marvel's cinematic universe. He may not be trying to destroy the universe, but his crusade is all the more chilling for being on the personal level.

As the story digs into his background, there is an attempt to add nuance, and this actually seems to serve to make him more sinister rather than less. Tennant's genuine bemusement at morals is cleverly played.

Carrying off a strong, damaged and difficult hero can not have been an easy task, and in Krysten Ritter, Jessica Jones has elevated a fine actress to a new level. Vulnerable, powerful, complex and yet still identifiable to the audience, Ritter's portrayal needed to be a veritable tour de force to keep pace with Tennant and she has carried this off with aplomb.

That she is also required to be a romantic lead and by terms humorous and physically menacing as her story progresses is likely to make her a deserved contender for the awards.

In Jones' companion series Daredevil, terrific fight scenes were a mesmerising mix of balletic grace and visceral contact, and it is gratifying that the violence (and boy is there violence) in JJ feels so very different but no less impactful.

Fight scenes involving Ritter – fury and power without any obvious technique along with the brute strength of Luke Cage – are also a million miles from the more cartoony stylings of Thor or Hulk, and all the better for it.

Amid the darkness are scenes of light – perhaps too few, in truth. But Jones's sarcasm manages to bring an occasional sense of levity, and Tennant's delivery of great lines from a character who genuinely doesn't, in his words, "give two shits" beyond his own selfish goals manages to entertain throughout (a Star Wars reference is a standout moment).

And while we're on darkness, this may be the same Hell's Kitchen from Daredevil, but there is deliberately more daylight in JJ, which given the noir stylings was definitely a brave and successful choice.

The series is not perfect, of course. Some of the second tier characters are a little thinly drawn and there are moments where you are genuinely left scratching your head as to why Jones isn't using her powers more. One early chase scene down a staircase surely could have been an opportunity to use a power she calls "falling with direction."

There are also moments in the season (especially at the halfway point) where the pacing slows.

For many shows, this would be all but imperceptible. But, when things are moving as swiftly as they do in Jessica Jones, the occasional changes of gear do jar – especially when it's for another sex scene that doesn't really move the plot along, or a conversation between characters that we haven't really grown fond of.

And as we reach the denouement, some weaknesses arrive as it becomes increasingly more difficult to accept the reasons why a swifter end is not sought, and motivations become more muddied. The first half, to my mind, is far stronger tonally than the second.

But these are minor gripes in the grand scheme of things, Jessica Jones is a reluctant hero, whose decisions at most points make sense on a human level, and that makes for a far more entertaining watch than someone who is heroic by default.

This is definitely a series for adults, but that phrase is so often used pejoratively that it is almost unfair to apply it to a show that does not patronise or pull punches.

As the story weaves its way, you can't help but be drawn into the world and a story that's less about powers and more about power.

The techradar verdict: Watch this