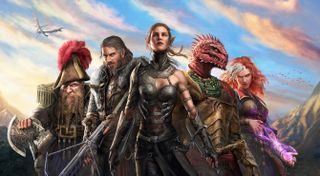 Steam’s Remote Play Together feature has exited beta and is now officially live, letting you play couch co-op games – those that support any form of local multiplayer – with friends online. And there are several good reasons why this could be one of the best things to happen in PC multiplayer gaming for a long time…

Firstly, only one player needs to own the game, so there’s no need for anyone else to buy it to enjoy all the fun. That one person hosts the game and invites up to three others to join (potentially more players if you’ve got a fast connection), and streams the game session to their devices.

As they don’t have to have the title installed, the other players can be using any device – not just a PC (Windows, Mac, or Linux) but also Android and iOS devices (mobile devices will go via the Steam Chat and Steam Link apps).

So this is some pretty cool stuff going on here, for sure. Although how well games will play on mobile devices remains to be seen, and of course in general, a lot will depend on the host player’s internet connection (not to mention the other players’ connections).

To celebrate the launch of Remote Play Together, Steam has kicked off something of a sale on local multiplayer games to encourage folks to get going with some virtual couch co-op action.

While a lot of those titles might be pretty obscure affairs, there are actually some tempting discounts on some choice big-name games. And that’s another reason why this new feature could be a big deal in more ways than one…

Divinity: Original Sin 2: 45% off at Steam
This is a chunky discount, and the thing to bear in mind here is that if neither you or your friend own it, only one of you has to buy the game. So if you look at it that way, and split the cost of picking it up between you, you’d each only be paying 27% of the normal asking price. Now, imagine this scenario with a four player co-op game...View Deal

This current sale ends on November 25, so you've got a few days yet to make your choice about what multiplayer goodies you might want to pick up on the cheap.