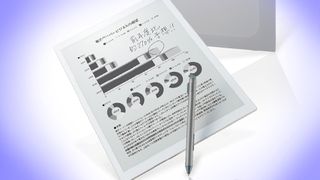 One of the easiest ways to be a little more environmentally friendly is to cut down on paper waste. Sony's latest tablet wants to be a reusable writing replacement, though it trades the ecological harm of physical paper for the economical harm of its price tag.

Enter the DPT-RP1, a massive tablet and update to the Sony's previous 'digital paper system,' the DPT-S1.

The DPT-RP1 features a 13.3-inch display with an impressive 1650 x 2200 resolution, a precision stylus that attaches to either end of the tablet (much to the relief of lefties) and a non-slip design that makes it feel like you're actually writing on paper.

The DPT-RP1 is designed to work with Sony's Digital Paper App interface, which allows files, notes and reading material to be shared from the tablet to a computer.

Unfortunately, the DPT-RP1 only supports .PDF files, so anyone looking for a big-screen replacement to their Amazon Kindle e-reader is going to be severely limited.

The DPT-RP1 is set to go on sale June 5 in Japan. For those looking for a productivity tablet of their own, the 12.9-inch iPad Pro is more than up to the task for a similar price/screen size. If that's not your cup of tea, there's a whole bunch of iPad Pro alternatives out there that can fit the bill.