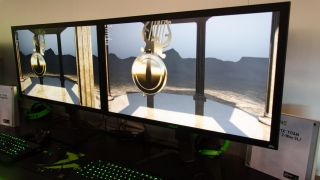 Nvidia G-Sync hopes to cure all that ails computer monitors

Nvidia and AMD turned up the APU wars at CES 2014 with their respective announcements of Tegra K1 and the new Kaveri APU.

While the two companies are busy with a mobile war Nvidia snuck in some extra punches introducing a new set of G-Sync powered monitors, further developing its ecosystem.

Among the new slew of seven monitors sporting the frame rate stabilizing hardware-software package, there were the Philips 272G5DYEB and a G-Sync equipped version of the ASUS PQ321QE.

To get a better sense of Nvidia's future plans for its display optimization technology we caught up with Nvidia's Director of Technical Marketing, Tom Petersen.

It's all in your head

For a quick brief, G-Sync technology is an extra Nvidia part display manufacturers have implemented with their technology. This additional bit of PCB talks directly with Nvidia GPUs from the GTX 600 series, or higher, to regulate the monitor's refresh rate with the GPU's frame rate.

Classically monitors come with a refresh rate of 60hz, 120hz, or 240hz, but depending on the power of a computer's GPU, it might only be able to render a game at 42fps or 30fps. While the game is limited to this lower frame rate the monitor is still refreshing at its maximum speed, which causes repeated frames and videogames to stutter.

"It turns out your brain is not very sensitive to frame rate variation but it is very sensitive animation errors," Petersen explained. "As long as the animation is correct, it's going to be fine. But, to screw up your animation and have to repeat a frame, then the timing is off and your brain perceives that as rapid acceleration or deceleration."

G-Sync offers gamers another solution to smoothing their gameplay experience. Thus far, V-Sync has been the only wide spread frame rate smoothing solution that forces the GPU FPS to match with a monitor's refresh rate. However, the process has always been intensive and mainly prevents tearing artifacts from popping in as the screen attempts to draw two or more images at the same time.

From our own impressions, G-Sync does a good job at stopping stuttering and Petersen promises it does not use very many GPU cycles to do it. However, it's not a catch all solution. Motion blur is still present as some users might experience from quickly panning across the map in League of Legends.

As Petersen explained it "motion blur is actually in your brain and it's caused by large gaps in animations, because the frame rate is low and the motion is fast. There's things we're definitely look at to fix that but it's primarily affected by frame rate."

A future of IPS gaming panels

Beyond improving the handshake between refresh rate and frames per second, we were curious if the G-Sync technology could be implemented to make other screen technologies more suitable for gaming.

For one thing IPS have have always been well regarded for their good great color fidelity and viewing angles, but people have always thought that it was too slow with response times often between five and seven milliseconds.

Petersen, however, believes that G-Sync technology does such a better job better than V-Sync that the IPS slowness really isn't an issue anymore.

"Effectively the frame rate at 60hz [and] as long as its G-Synced, it is plenty," he said. "What I think you're going to see is another round of IPS panels at 60hz coupled with G-Sync modules."

Getting off of screens, we spoke with Petersen on his and Nvidia's thoughts about being left out in the next generation consoles as well as the introduction of Mantle.

"I think the fact that AMD is in consoles is good for AMD," Petersen quipped. "But the truth is there is opportunity costs to anything so AMD chose to do the consoles and we chose not to."

"I'm really interested in consoles in the long run because they're caught in the middle between mobile devices coming up and high-function, small form factor PCs at the high-end."

With Steam Machines adding to the already healthy supply of Gaming PCs, Petersen isn't sure where consoles will lie in the next five years as mobile devices become more ubiquitously connected.

More devices are able to stream games directly to TVs as well as connect to controllers. Petersen also alluded to how streaming in homes is becoming much more common with steaming PC games to TVs becoming a reality thanks to GameStream.

"For me, consoles are a question mark whether that model has a lot of sense going forward," Petersen said. "We've been working on other things like G-Sync and Tegra, overall I'd say we made the right choice."