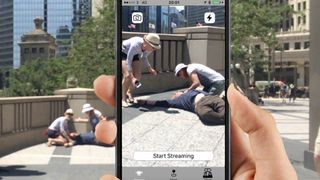 For the last five months, The London Ambulance Service has been using an app to help people respond to cardiac arrests, it has been revealed.

Every second counts when it comes to responding, so the idea is that if you encounter someone experiencing a cardiac arrest, head into the app and hit the panic button. Not only will it alert paramedics, but it will also send alerts to three nearby trained responders. Ambulance crews can also use the app to call for extra help.

According to New Scientist, the app has been used between 20 and 30 times a day, and is used by some of the 7500 trained first responders in the UK.

Most recently, the developers have added video streaming functionality, so that paramedics are able to see the patient before they arrive on the scene.

Creator Mark Wilson also thinks that the app could help prevent misdiagnosis by untrained bystanders, as they would be able to communicate with paramedics. It could even help save ambulance resources for real emergencies, as he suggests that if the medical condition isn't urgent, a taxi could be summoned instead of an ambulance.

The app isn't necessarily the first of its kind. For example, last year we reported on a similar app that had been developed in a plan. But this use by the London Ambulance Service certainly sounds like one of the most advanced trials of the technology so far.