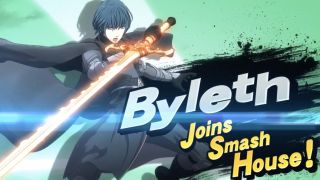 Three Houses only came out in 2019, making this a relatively recent character to feature in the game. Some fans (ourselves included) are a bit peeved not to get something that more players can relate to, but Fire Emblem fanatics will no doubt dig it.

What is interesting about Byleth is that you'll be able to pick a male or female version of the character; we're told in the video by Sakurai that they have slightly different names in Japanese, but "in English they share the same name."

We knew the final fighter would be released "by Feb. 2020", according to the Smash Bros website, but we now know Byleth will be arriving on January 28, which is sooner than we might have expected.

The live stream was hosted by Masahiro Sakurai, game director for the Super Smash Bros series, which he created back in 1999.

Players will be able to download the fighter digitally individually or as part of the Fighters Pass – which provides access to all the DLC characters as they land in the game.

The trailer is good fun, with Byleth first appearing with a sword weapon, and being mockingly asked whether there aren't "too many swordsmen" already. (There are a lot.) You'll also get the chance to use other weapons such as an axe, lance or bow to vary things on the battlefield.

While that concludes the initial five characters for Smash Bros Ultimate's Fighters Pass, we know that there'll be plenty more in the pipeline, with the fan fervor around each additional character keeping the game selling consistently since its release – and there's plenty more Nintendo can draw on from its first-party or third-party franchises.

Will we ever see Crash Bandicoot, Spyro the Dragon, or the brutal Doomguy marine? Given the bland choice Byleth represents, we certainly hope so.