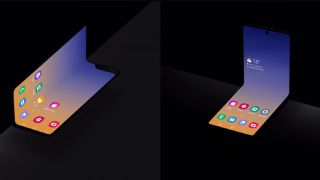 Samsung Galaxy Fold 2, the successor to the first foldable phone by Samsung, is expected to be announced on February 11 at the Samsung Galaxy Unpacked event in San Francisco. Now, new reports have surfaced, which indicates that the Galaxy Fold 2 will be powered by Qualcomm Snapdragon 855 chip, which was the benchmark for Android flagship phones till the chip-maker announced the Snapdragon 865.

According to tipster Ishan Aggarwal who told this to MySmartPrice, the Galaxy Fold 2 will allegedly be powered by the Snapdragon 855 processor and not the latest Snapdragon 865 chip. Aggarwal adds that there won't be an Exynos version of the foldable phone and that the Snapdragon 855 version will be standard across all the regions it enters, including the US, Europe, and Asia, among others.

Samsung Galaxy Fold 2 is said to feature a different foldable design than the first generation and is likely to opt for a clamshell profile like the Moto Razr 2019. Moreover, going by recent leaks and renders, the Galaxy Fold 2 is expected to sport a single 10MP selfie camera housed in a punch-hole cutout.

Samsung Galaxy Fold 2 is rumored to feature a 6.7-inch display that folds on the horizontal axis. On the front, when the phone is folded, there could be a secondary display measuring 1-inch. In comparison, the original Galaxy Fold has a 7.3-inch main screen and a 4.6-inch secondary one. On the other hand, the Moto Razr 2019 features a 6.2-inch main screen and a 2.7-inch screen on the front.

The Fold 2 could also sport a 108MP primary camera with a telephoto lens that enables 5x optical zoom. These rumors followed an earlier report that Samsung was working on two new foldable phones, one of which is said to be a “clamshell-like device,” which could make it the device above.

The other is said to have a vertical fold like the original handset, but one that folds outwards, so the main screen is on the outside and always visible – it’s just either big or small, depending on whether the phone is folded or unfolded. It sounds similar to the Huawei Mate X.

Apart from the design, information on the hardware inside the Galaxy Fold 2 is scarce, and we'll know more as we near the official launch of the phone. We have also compiled all the leaks and rumors about the Galaxy Fold 2 on a single page, which you can access here.