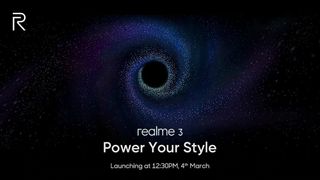 Look at the sky, the stars are unwrapping something celestial. Witness the launch of #realme3 #PowerYourStyle live on 4th March on our official handles and be a part of the cosmic event. Find out more at https://t.co/HrgDJTZcxv pic.twitter.com/gG0l0ZnBm1February 22, 2019

The Realme 3 is the successor to the Realme 2 which was launched in India in August last year. The Realme 3 also has vertically-aligned dual rear cameras and a diamond design on the rear panel, and one of the rear cameras is rumoured to be a 48MP main sensor.

Due to eased market restrictions, e-carriers Amazon and Flipkart will not offer Realme devices exclusively. The price of the Realme 3 is not known, but is expected to be under Rs 10,000.

The launch event will begin at 12:30pm IST on March 4, and Realme has also sent out media invites to the same.