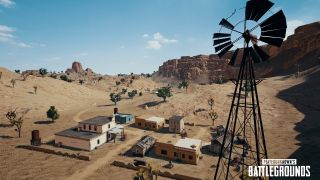 After months of teases, PlayerUnknown's Batteground's second map has finally been fully revealed.

Called Miramar, the map is mainly covered in desert, which sits in stark contrast to the current lush forest island featured in the game.

The map features a number of landmarks including a motorcycle death bowl, a colorful coastal town, and plenty of the shipping containers that players will know and love from the existing map.

The new environment will be joined by a host of new weapons and vehicles including VW Camper Vans, jetskis, and the Win94 rifle (which appears not to be a long-lost Windows operating system.

The new desert map has been a long time coming, but is finally due to arrive as the game finally reaches version 1.0 on PC, with an early access Xbox One release due on December 12.

The inclusion of the new map is sure to be welcomed by the game's community, who have come to understand every inch of the game's existing massive map.

However, it's not yet clear how the new map will feature in the game. Will it be selectable as an option from the game's menu, or will it be randomly assigned to matches like the current different weather conditions?

At any rate, the map is set to receive a full gameplay preview during tonight's Game Awards show. For the full raft of new screenshots, check out the Steam announcement page.