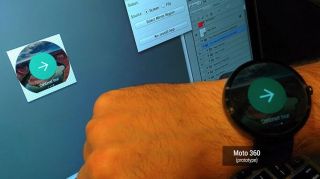 Round face? No problem

Apple's WWDC keynote may have left us without the iWatch, but rival Google's IO conference later this month is already promising plenty* on the wearable front.

In fact, Google seems so amped about its Android Wear platform that it's already showing two devices, the LG G Watch and Moto 360, in action, teasing what they can do and what apps on the smaller screens will look like.

Roman Nurik and Timothy Jordan, a pair of design and developer advocates on Android Wear, took to the Android Developers Blog to talk up - and show off - the work they're doing designing apps on prototypes of the wearables.

Using a walking tour app Nurik cooked up for a Google Glass design sprint as a launching point, the two started creating mock-ups for the round-faced Moto 360 and square-jawed G Watch. Instead of using voice commands to launch the app, the duo imagined walking tour suggestions cropping up as wearable wearers went about their day, relying on contextual awareness to send the appropriate notifications.

The two also discussed the challenges of designing for smaller screens, with rounded ones seemingly more difficult. However, Nurik and Jordan said while working in a constrained space was challenging, it forced them to find the most effective and simplest way to deliver information.

In addition to the walking tour mockups, the duo also toyed with an Android Design Preview tool that lets users mirror part of computer screens to a connected Android device, in this case the Android Wear wristers.

The big takeaway from Nurik and Jordan's post is that Android Wear devices will rely heavily on contextual information to pull up relevant information, something that's been said before but now shown in application.

Their walking tour app is a prime example of a function the wearables can perform that keys into the wearer's surroundings and what they are or could be doing at that very moment.

*Nurik and Jordan say as much in their own blog post addendum: "Have we mentioned #io14 will have tons of great content around both design and wearable computing?"