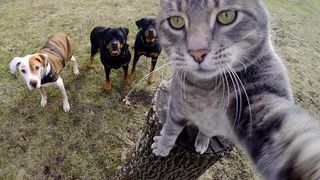 As we all know the internet is pretty much half filled with cats thanks to their loving owners taking a never-ending stream photos and videos. But what if we told you there was one furry feline capable of taking selfies?

Meet Manny, the gray tabby that can take better selfies than you and has tens of thousands of followers on Instagram. According to Love Meow, Manny is fascinated by cameras, and especially GoPros. Whenever the tabby's human, @yoremahm, comes close with an action camera, he reaches out to paw at it, thus creating the purrfect selfie pose.

Manny first discovered his natural modeling talent after reaching up to inspect a camera. Since then, the tabby has been drawn to all the shiny glass and attention. You'll even find him often jumping into the frame to photobomb a picture.

@yoremahm has posted countless Instagram images of Manny by himself, but also often with his dog friends in the Arizona wilderness. On New Year's Eve, Manny even became a viral sensation when his Instagram photo turned up on 9gag with over one million likes.

It's such a wonderful story that captures both the interaction between photographer and model as well as the curiosity that drives photography in the first place.