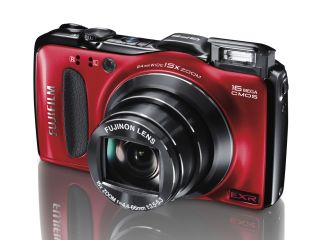 The Finepix F600 EXR is the same size as the F550 EXR it supersedes, which will remain in the range along with the F500.

With a 15x optical zoom, the camera offers the 35mm equivalent of a 24-360mm lens. Using the new Intelligent Digital Zoom, the zoom range stretches to 30x.

Conventional digital zoom usually increases picture noise and generally leads to lower quality results. Fujifilm's Intelligent Digital Zoom claims to be different by assessing areas of contrast within an image and applying selective processing to the sections of the image where sharpness can be boosted without lowering image quality.

The new Motion Detection function helps the camera tackle motion blur. The camera automatically detects whether a subject is moving, and if it is, uses a higher ISO setting. If no subject movement is identified, ISO is kept lower along with image stabilisation.

GPS tagging was included on Fujifilm cameras for the first time with the F550, but extra functionality has been included on the F600.

The GPS Landmark Navigator makes use of Augmented Reality to show you where famous landmarks are in relation to your current location. Users are also able to add and edit locations.

Photo navigation can also be used to help get back to a previously photographed location, as well as enabling users to create a route of their travels using Google Maps.

More advanced features on the F600 EXR include, ISO sensitivity up to 12,800, a full range of exposure modes including aperture priority, shutter priority and manual, 8fps continuous shooting and the ability to capture in raw format.

The Fujifilm F600 EXR price will be £269 RRP, with on-sale dates scheduled for the end of October.