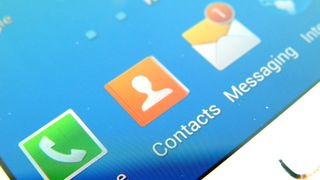 So close, you can smell the pixels

Samsung has reportedly confirmed that it's working on smartphone displays not just in the 2K range, but all the way up to 4K resolution.

This news comes out of the South Korean Ministry of Trade, Industry and Energy's Semiconductor and Display Technology Roadmap Seminar 2014, as reported by Korea's media.daum.net.

Samsung's eventual adoption of 2K QHD 2560 x 1440 AMOLED smartphone displays comes as no real shock, but it is somewhat surprising that the company would mention Ultra HD 4K phone displays this early.

The 2K screens could debut as soon as Samsung's Galaxy S5, expected to be announced soon, though unfortunately there's no word from Sammy on that possibility quite yet.

Late in 2013 Samsung revealed it hopes to have 4K displays on smartphones by 2015, though it may want to focus on the 2K hurdle before tackling resolutions of 3840 x 2160.

As G for Games calculated, on a 5-inch display 3480 x 2160 equals a pixel density of roughly 820 ppi. With most phones running in the 300ppi-or-so resolution range, jumping to over 800 will take some technical savvy.

Even 2K smartphone displays still little more than a glimmer in most manufacturers' eyes, it will likely be awhile before we learn about whatever advantages jamming so many pixels into so small a space can produce for the human eye.