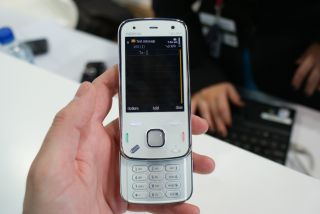 Nokia's next high-end cameraphone looks like it's been leaked onto the net, complete with some nice high end specs to boot.

According to a Nokia-like document (well, it has the logo on) the N87 will have a 12MP camera as well as a high-end touch screen as well.

The follow up to the N86 will have a 3.2-inch capacitive effort, with super hi-res 800 x 480 WVGA resolution, making navigation and picture watching all the nicer.

It's also got the slogan 'capture as it happens' at the bottom, likely meaning that taking the pictures will be a faster affair than we're used to.

The 12MP sensor will be flanked by a dual LED as well as a Xenon flash, so it will have the photography stats to back up its multimedia prowess.

Perhaps more worrying is the 600MHz processor - that might have been fast for 2008, but times have moved on, and given it could be Q3 next year when this releases, we'd have hoped for more from Nokia.

The touchscreen means the physical keyboard will have been dropped, but a slide will still be present for multimedia keys - so if that's the case, we'd hope a keypad could be included too as it's much nicer to type on physical keys.

Either way, this is either a concept that will never see the light of day or a phone that's months away from release - and we hate both those things.

From PhoneArena via BGR