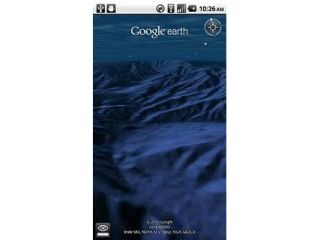 Google brings the sea to your phone

Google has announced Google Earth for Android 1.1 – complete with ocean viewing options too.

Basically an extension of the popular globe-surfing application, users can now plunge into selected portions of the ocean and see what it looks like underneath.

Admittedly, it's like land but with a lot of blue around it – but it's a nifty feature for Android phones, and it's free.

The force is strong in this one

You can also 'look around' under the sea by activating the feature and tilting the phone around or using multi-touch – optional Darth Vader sounds to make yourself believe you're in scuba gear are optional.

Another feature added is the 'Explore the Ocean' Layer, which allows you to see other photos of large expanses of water taken by users, with special gold icons representing the Mission Blue Hope Spot initiative.

If you're one of the lucky Flash users (or have Froyo) then you're also in luck: Google Earth now supports Flash in balloons, so, you can watch videos right in the balloon.

Google Earth for Android 1.1 is available in Android Market today for most Android devices running version 2.1 or later.