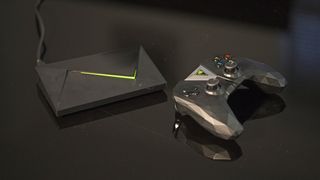 There have been whispers of a new Nvidia Shield TV device, a successor to our favorite of all Android TV devices and TV streaming boxes, for some months now. Those rumors have been ramped up a notch by the discovery of a Bluetooth certification filing apparently related to the forthcoming device.

A new Shield device, seemingly in a dongle-rather-than-box form factor, has just received certification by the Bluetooth SIG gatekeepers, another milestone towards the product's eventual release.

The Bluetooth listing cites a device number P3430, which lines up with an earlier FCC listing also relating to an Nvidia device.

The certification notice also reveals a few details about the new device, seeming to confirm that while a new Android Pie-based version of Nvidia's Shield TV interface will be present, it'll be using the so-called 'Wi-Fi 5"  802.11ac Wi-Fi standard as opposed to the new Wi-Fi 6 offering.

Previous leaks have pointed to the new Nvidia Shield TV taking up a smaller dongle-based form-factor as opposed to the mini-console style device it currently exists as, as well as packing in an updated version of the Tegra X1 chipset.

With the FCC's confidentiality agreement on the device's specifics set to expire next January, a showcase at CES 2020 early next year is looking increasingly likely.