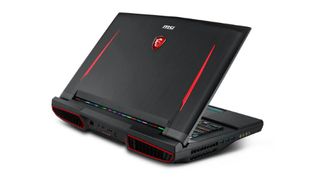 The launch of Intel’s 8th generation cores allows for stringent specialisation, which is why gaming laptops need to step up their game and cater to the purists. MSI’s new launch revamps their entire line of laptops with better cooling systems, 8th generation Intel cores and bigger audio chambers.

There are a total of five products that have been launched including the GE Raider RGB, GS65 Stealth Thin, and the GT75VR Titan.  The revamped GT and GE series have come to India first, while the GS laptop, which was already available internationally, has actually come to India quite late.

There's even a variant of the GT75VR Titan that features the Intel Core i9 processor.

The laptops can be pre-ordered from Flipkart, Paytm and other authorised sellers. The stocks will come in by the end of April and be available at authorised outlets. MSI, themselves, only have three stores all over India but they are opening a fourth in Pune.

The GT75VR is probably the most impressive of the bunch launched with its mechanical keyboard and the option of an i9 8th Generation processor. Being the flagship model, its unique selling proposition is the fact that it supports 10Gbps Killer Ethernet.

The gaming laptop also features Killer Doubleshot Pro for connecting to the Ethernet and Wi-Fi simultaneously. The laptop will connect to whichever offers faster speed and switch dynamically between them.

The GT83 Titan 8RG SLI variant costs Rs 3,99,990, and is the most premium of the three variants that are available. It comes with the GTX 1080 SLI that has supports for running two graphics cards simultaneously.

MSI’s slogan reads, “Some are PC, we are gaming”. They hold true to that in the GS series. The laptops are designed to be subtle and sleek, rather than scream their identity as a gaming laptop. It seems to pull it off by being 17.7mm thin and weighing only 1.8kgs.

What you notice first about the Stealth thin is how despite its thin bezels, the webcam has been retained along the top edge rather than shifting it to the bottom, as is the case with the Dell XPS series. Being a gaming laptop that’s posing for business utility, being able to video call without worrying about double chins is a nice relief.

The 4.9mm bezels combine to form a 82% screen-to-body ratio.

Some users may not care about camera placement, but they’ll definitely have an opinion about the laptop’s screen. MSI claims that they have the world’s first 144Hz/7ms IPS display. The GS series is the only IPS display in the MSI portfolio right now that offers a screen this fast. The laptop has a screen size of 15.6-inch.

The Steelseries RGB keyboard also has an aspect of subtlety about it with lighting being under toned and the keys lacking obvious transparency. Due to the size of the laptop, there’s no separate number pad on the side but that’s hardly a deal breaker.

The audio, on the other hand, has been rehauled into a bigger chamber with better sound. They’ve combined the capabilities of Nahimic 3 and Hi-Res Audio in an attempt to deliver lossless music.

There are two variants of the GS65 and the difference between them is basically the graphics, RAM and storage. While both of them have the 8th generation i7 processor but the more expensive model also has the GTX1070 with 8GB GDDR5, while the other has the GTX1060 with 6GB GDDR5.

The GE Raider RGB Edition is inspired by the design on sports cars. Therefore one of the major changes brought about in the laptop is the RGB lighting on the lid.

Both variants of the Raider have the GTX 1070, i7 Intel Core 8th Generation processor and DR IV 16GB. It also comes some useful features including Nahimic 3, Killer networking, Bluetooth 5.0 and more.

One of the big concerns with MSI users is servicing. There were only 11 services centers at one point, but now the company has a total of 32 centers across the country. This is big boon for users who were willing to spend on a laptop but service accessibility was one of the factors holding them back.