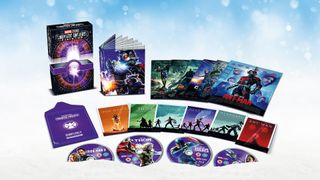 If you need to buy a present for a friend, family member or partner this year and they just love binging on movies, then you’re in luck. You’ve got a huge range of options, from splashing out on a fancy piece of tech if you’ve got an eye-wateringly big budget or checking out which of their favourite films have just made it to Blu-ray if you’re counting your pennies.

So whether your loved ones are likely to be streaming a movie, watching a newly unwrapped DVD boxset or catching up on the cosy classics that are scheduled over the Christmas period, we’ve collected together the best TVs, projectors, universal remotes, DVDs, Blu-rays and even some must-have merchandise to cuddle up with during a festive film fest.

If you’re getting a gift for someone who takes their movie nights very seriously it might be worth tempting them to ditch their usual TV set-up and opt for the next best thing to an actual cinema -  a damn good projector.

There are plenty to choose from at the moment to suit most higher-end budgets, but the HD142X from Optoma is one of the more affordable (although you’re unlikely to find a truly cheap, decent projector, just FYI).

The beamer boasts 3,000 ANSI lumens of brightness, which means you can use it in any ambient light conditions, ideal for those who don’t just want a movie marathon after dark.

On top of that, Optoma says it’ll last for up to 8,000 hours, so unless you plan on watching the Lord of the Rings saga over-and-over-and-over, it should keep going for at least a decade if you use it for a regular length movie every day.

In our review earlier in the year, we found the projector to deliver great color and contrast, which is really apparent when you see how crisp the images are and how detailed shadows and black areas are, making the HD142X great value for money.

₹9,900
View at Amazon
1 Amazon customer review
☆☆☆☆☆
Hours of fun
The beginnings of the franchise
Few special features
Only the beginning of a giant series

Despite the critical acclaim of Wonder Woman, Justice League opened to a lukewarm reception putting the future of the DC universe under the spotlight. But, on the other side of the comics ring, Marvel Studios is going from strength-to-strength, with the success of Thor Ragnarok under its belt and the heightened excitement around the soon-to-be-released Avengers Infinity War, Black Panther, Deadpool 2 and more. The list could (and will) go on and on.

So if you’re buying for a comics movie fan this year, let them bask in the glory of Marvel Studios over Christmas with this collector’s edition boxset. The Phase 1 set comes with six movies: Iron Man and Iron Man 2, The Incredible Hulk, Thor, Captain America: The First Avenger and Avengers Assemble. All come with a bunch of extra features and deleted scenes, as well as a ‘Phase 1 archives’ bonus disc.

As you’d expect from such a special edition, all of the discs are in bright, Marvel-esque packaging, but a nice bonus for die-hard fans is the mini postcards and artwork for each film. So even if you’re buying for someone who owns a lot of these already, Marvel lovers will appreciate having all the extras too.

If those movies don’t tickle your fancy, there’s also a Phase 2 set available featuring some of the later Marvel movies, like Ant Man, Guardians of the Galaxy and Iron Man 3.

You can have a really enjoyable movie experience with just a TV and a decent soundbar. But if you want the best home cinema experience imaginable, it might be worth investing in an AV receiver - or buying one for the movie lover or audiophile in your life.

Essentially AV receivers act as a hub, supporting your home cinema setup and ensuring audio and video signals are sent to and from the right devices.

There are plenty on the market for a range of price points, but the STR-DN1080 model from Sony is a TechRadar fave because it delivers a lot for a relatively small price tag in comparison to its competitors.

The receiver comes with six different HDMI inputs, all of which are HDCP 2.2-enabled. It also comes with HDMI outputs, for using combi TV and a projector, as well as two analogue AV inputs, a pair of stereo phonos and two digital audio outputs. When it comes to connectivity, it can sync up via either WiFi or Ethernet and has built-in Bluetooth with NFC for quick pairing, as well as Airplay. It also comes with Chromecast as well, ticking all the major wireless boxes.

One remote to rule them all

If you’re buying for someone who loves their smart products this year, then consider one remote that’ll rule them all. The Logitech Harmony range features a number of remotes to keep a confusing smart home in check.

The Harmony Elite is one of the best of the bunch, allowing you to control up to 15 smart home devices all from the palm of your hand. Whether that’s a bulb or a TV, as long as it’s smart you can command it.

As you’d expect, a magic smart home wand like this one is ideal for those who like uninterrupted movie marathons, allowing you to change the lighting, turn up the volume or even turn on the kettle without moving much.

Watch those C-Beams glitter in 4K

Check Amazon
8 Amazon customer reviews
☆☆☆☆☆
It's the best film of all time ever
Er... do you need another reason?
It ends

A must-have for fans, the special edition set includes extended scenes and special effects breakdowns from the sci-fi masterpiece, which haven’t been seen anywhere else, as well as different versions of the film, including the Original Theatrical Cut, International Theatrical Cut and Director's Cut. It also comes with an exclusive artbook that features behind-the-scenes photos and storyboards.

If you’re looking for a 4K UHD Blu-ray player to wow your guests this Christmas, or you want to treat someone else to the gift of exceptional movie-watching, then the DMP-UB700 from Panasonic gives you the best bang for your buck.

The player has 4K UHD compatibility, but it’ll also work for regular Blu-ray DVDs, regular DVDs and CDs too. It has 4K iterations of both Netflix and Amazon on-board too, so you can stream directly from your favourite services if you don’t get your hands on a shiny new Blu-ray boxset for Christmas.

It’s not the best-looking device out there, but what’s important is it delivers high-end image quality with fine details and great colour accuracy, all of which rival Panasonic’s pricier Blu-ray player option, the UB900.

Fans of The Force may have been able to get their hands on an R2-D2 toy for decades now, but it’s only recently that Lucasfilm has teamed up with robotic toy company Sphero that you’ll get a droid that looks, feels and acts just like R2.

You can control the Sphero R2-D2 droid with your smartphone or just watch it patrol, light up thanks to integrated LED lights and bleep and bloop from its built-in speaker all on its own. As you’d expect from Sphero, a company famous for its spherical robots, the R2-D2 moves around seamlessly. A nice additional feature is that R2 will also react to other app-enabled droids and the Star Wars movie as the bin on legs reacts by your side. If you’re after a gift for a Star Wars fan, then this really is the drone you’re looking for.

If you didn’t grow up with a soft spot for R2-D2 like everyone else (seriously?) and prefer the BB-8 from The Force Awakens (and the forthcoming The Last Jedi), then you can get a BB-8 Sphero that works in much the same way.

Stunning pictures at an affordable price puts OLED back on top

If you’ve got a massive (and we mean massive) budget, then the best way to bring the movies to someone’s front room without them leaving the sofa is with one of the latest OLED TVs.

The C7 from LG is our favorite from the past twelve months, delivering a stunning contrast-rich picture and excellent operating system in a mind-bendingly slim design. It may seem pricey to those who aren’t in the market for a TV, but actually comes in at a reasonable price compared to the competition. Our only issue is that the speakers of more expensive models tend to perform better, but just add a soundbar and you’ll create a home cinema experience fit for a king or queen.

If you know a Guardians of the Galaxy Vol. 2 fan then I’ll bet they’re a huge fan of Groot! Or do we call him Baby Groot now?! Regardless, this ridiculous yet adorable 11.5inch dancing Groot toy jiggles about to music clips from the movie’s soundtrack. But he can also detect external music too, so when he hears something with a great beat, his eyes light up and he’ll crack out some moves.

Forget big, bulky home cinema audio systems. If you’re seriously in love with movies, or need to get a fancy gift for someone who is, all you really need is a soundbar.

Luckily there are literally hundreds to choose from, but one of our favorites is the older Q Acoustics model, the M4. When we reviewed the M4 soundbar last year, we decided it wasn’t perfect with only 2.1 channels of sound and no Wi-Fi. But for the price, it’s still one of the best soundbars around, delivering beautiful musicality to your front room in a simple, compact package.

But enough about looks, it’s the M4’s exceptionally detailed, powerful and clean audio that makes it a perfect companion for music, gaming and, of course, movies. The good news for those who might just be starting on their home cinema building journey is that it’s also very straight-forward to set-up and use.

All the Bond you could ever want

There have been plenty of James Bond box sets over the years, but this recently released collection features the whole back catalogue of 007 movies, from Dr. No from 1962 through to Spectre from 2015, all in Blu-ray with optional digital downloads.

Any die-hard fan of the Bond will have likely seen each of these at least eight times, but it still makes a great gift - especially if you’re pairing it with an upscaling Blu-ray 4K UHD player, but we understand not everyone is Miss Moneypenny.

Once you pop, you can't stop

No movie night is complete without a huge helping of popcorn on your lap. But rather than saving that sweet n’ salted experience purely for cinema visits, you can bring it straight to your living room to treat your guests this Christmas.

There are plenty of popcorn makers on the market, but this reliable device from your mum’s favorite brand, Lakeland, looks good and is really easy-to-use.

Just add in the ingredients and three minutes later you’ve got your own poppin’ corn. You don’t even need any oil, meaning it’s a healthy option for anyone watching their waistline. Having said that, feel free to add as much butter and as many flavorings as you like.