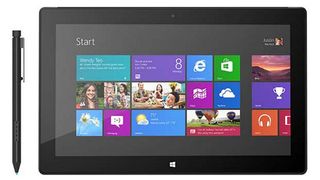 Back in stock soon

The Surface Pro will be back in stock in the US and Canada this week, Microsoft has said in a blog post. The device sold out on its first day on shop shelves, though many say this was due to a lack of stock from Microsoft rather than high demand.

In the US, extra units of the 64GB Surface Pro are on their way now to Best Buy, Staples and the Microsoft store. The 128GB model will follow later this week, and should be in stock by the weekend.

Microsoft says those who reserved the device will be given priority.

The devices may take a few more days to reach Canada, Microsoft says. There's no word on when other countries will see more stock.

Many in the comments on the Microsoft blog put the shortage down to stock problems rather than ravenous consumer demand. It's all anecdotal evidence, with one person claiming they tried two Microsoft stores and a Best Buy to no avail.

Market research agency iSuppli estimates Microsoft shipped around 1.25 million units of the Pro's predecessor - the Surface RT - to shops, but a Microsoft spokesperson was unable to tell us how many Surface Pro units it sent out to retailers. Digitimes claims Microsoft only shipped a million Surface Pros.

No matter how many Surface Pros Microsoft shipped, it's not enough. Skim through the 14 pages of comments on the original blog post announcing the device was going on sale, and you'll see plenty of complaints from disgruntled customers keen to hand over their money.

Panos Panay, General Manager at Microsoft, tweeted in response: "We're excited for the response to Pro. Some are having trouble getting it. Sorry you're having to wait. We're working hard to get u Pro ASAP."