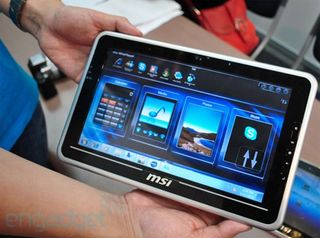 MSI has announced its entry into the burgeoning tablet PC market at this week's Computex event in Taipei, with the launch of the new MSI WindPad.

MSI's first device in the tablet category is the WindPad 100, which is a low-cost Intel Atom Z530-powered slate PC running Window 7.

The WindPad 100, aside from sounding like something developed and designed by Nick Parkes' Wallace and Gromit, also features a 10-inch capacitive display touchscreen with 1024x600-resolution

MSI has also created its own Wind Touch UI layer for the device, although we expect most users will quickly revert to the familiarity of Windows 7.

The WindPad will also have two USB ports, a very hand HDMI output for hooking it up and outputting 720p video to your HD TV and an integrated webcam.

MSI didn't say anything much about the Android-powered WindPad 110 in its Computex press conference, but the NVidia Tegra 2-powered 10-inch tablet running Android 2.1 is on show on the company's booth at the event. Engadget managed to get the first hands on with the new MSI Android WindPad 110