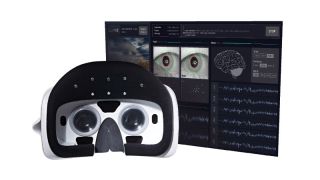 It’s pretty safe to say that virtual reality technology is now here. It’s arrived, found its parking space and doesn’t look at all likely to just disappear anymore. Now that it’s established, however, we’re all asking where it will go from here.

Different manufacturers will naturally have different ideas – some might want to improve what they’ve already got with improvements to design, comfort, resolution and software support. Some, however, might want to bring some entirely new features in the mix.

Created by LuxidLabs, The LooxidVR headset revealed at CES 2018 falls into the latter category. So, what makes it different? Well, this is a mobile-powered VR headset (so far so standard) but interestingly it comes with eye-tracking cameras and EEG sensors built in.

According to Looxid this makes it the first headset of its kind.

With this kind of tech, VR headsets could become far more reactive to user movements. For example, with eye-tracking you could perhaps glance around your environment rather than twist your neck like a screw top to see something only slightly to your left.

There’s also some interesting data to be gathered using these new features. EEG sensors for tracking brain activity don’t immediately strike us as useful for the standard consumer, for example. But then for medical institutions that use VR headsets in therapeutic treatments, this kind of information could be invaluable.

Indeed, on the headset's official site the capacity for emotional recognition of users is being pushed as a strength for researchers.

What is certain is that this is a jump for mobile-powered VR headsets and what we expect from them. High-powered consumer VR headsets such as HTC Vive may be at the stage where incremental improvements are the way forward. But for researchers and big consumer-minded leaps in virtual reality technology, we're going to need to see these kind of technological advancements continue.

Looxid VR is currently on show at CES but pre-orders will open on February 1 for an unspecified price and shipping date.