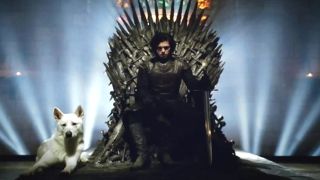 In the game of thrones, you torrent or you die

We all know someone who does it. Multimedia piracy is a modern crime perpetrated by a criminal with many faces. Once the domain of the archetypal geek, TV shows and movies are now downloaded by people of all ages and genders in any place there is an internet connection.

The cost, you would assume, is astronomical. According to TorrentFreak, Game of Thrones was the most downloaded show of 2012, with an estimated 3.9 million stolen files. This next to the approximate US TV audience of 4.2 million.

Surely, this has the creative team behind the show, reportedly the most expensive TV show of all time, quaking in its boots. But, if you thought that, you'd be wrong.

David Petrarca, one of HBO's stable of talented directors responsible for Game of Thrones, as well as True Blood and Hung, spoke about the piracy of Game of Thrones in Australia this week, and shrugged off concerns about its negative impact.

According to The Age, he spoke about torrenting as being part of the "cultural buzz" behind a TV show, saying it was how premium cable content like Game of Thrones manages to survive.

This is an interesting counterpoint to the arguments by content owners that piracy is stealing the food from the mouths of their children and the shirts off their backs. Instead, is piracy fueling the success of new TV shows?

HBO celebrated another milestone this week, announcing that the second season of Game of Thrones had broken DVD sales records for the company, with 241,000 box-sets flying off the shelves on the first day alone. The subscription TV network also announced that it had sold 355,000 individual episodes of the show via digital transactions.

Interestingly, 80 per cent of the piracy of Game of Thrones episodes happens outside of the US. Piracy, we can assume, is promoting shows in places where the content is not yet available. As I said earlier, we all know someone who pirates TV shows, and we know they do because these people invariably talk about the shows they watch - a lot. Word-of-mouth promotion is undeniably powerful, and in essence, piracy is generating the kind of advertising that money can't buy.

This is an intriguing conundrum for content owners to mull over. If they stamped out piracy, made popular content cheap and available around the world at the same time, they would have to return to old-fashioned marketing campaigns. They would buy placement on billboards and TV spots, bus shelters. The audience would be different, you'd assume, and the "cultural buzz" that Petrarca refers to, couldn't be relied on.

Any way you look at it, the system is in dire need of a shake-up. Obviously, illegal downloads are not the solution to this complex problem, but they could help inform content owners about user behaviours and they best way forward from here.