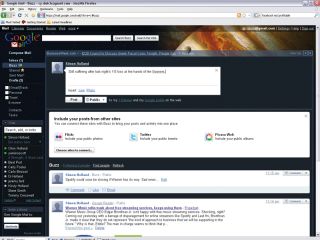 Google has rolled out powerful developer tools for Google Buzz, including the much-requested Google Buzz 'firehose'.

Google's developer blog suggests that firehose, which groups all public activities in a single place, was much-needed by its community.

"With the firehose, all public activities are available as they are published with a single subscription, thanks to syndication via PubSubHubbub."

Google outlines examples of how this feature can be used, pointing to Buzz Mood, which aims to give a snapshot of the Zeitgeist by looking at real time Buzzes.

"We will continue to innovate and iterate the Buzz API and encourage you to check out the new features and let us know what you think," concludes Google.

Buzz has perhaps not has the impact Google would have liked since its arrival - with the early weeks blighted by criticism of the privacy issues of the service.

But the company has stuck with its real-time efforts and seems determined to bring it to the fore.