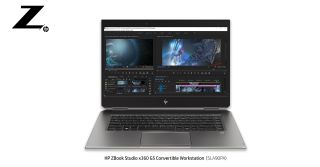 HP recently announced its Z-series in India which is aimed at creative professionals and product developers. The ZBook Studio X360 is a convertible workstation that’s designed keeping in mind the ultra-portable nature of a laptop but doesn’t miss out on intensive performance when required.

While the company has regular notebooks in its Z-series lineups such as the ZBook 14U or ZBook 15, the Studio x360 is in a league of its own. Being a 2-in-1 workstation, it can be used in multiple viewing modes and supports touch input.

A great workstation is one that doesn’t just offer sheer raw performance but enhances the overall experience of the creative process involved. And with the ZBook Studio x360, you get a powerful machine that’s uniquely portable.

HP’s ZBook Studio x360 is a versatile workstation that is powered by 8th generation hexa-core Intel Core i9 processors, up to 64GB RAM and NVIDIA Quadro P2000 3D graphics leading a superior performance. This laptop can be configured with up to 4TB NVMe storage which is 21x faster than HDD and 6x faster than SATA SSDs.

The 360-degree hinge design allows users to use it on their laps in addition to other viewing modes-- stand, tent, tablet, and docked mode. It comes in handy for several use cases like typing on the go, showcasing your work, sketching, and even docking the laptop to multiple displays.

The touch-enabled display supports up to 4096 levels of pressure sensitivity with tilt and low latency. It means that sketching or editing on the laptop in tablet mode will feel more close to using a pen and paper. The laptop supports the Wacom AES pen and can be fine-tuned with the help of three customizable buttons.

HP ZBook Studio x360 features a 15.6-inch 4K UHD (3840 x 2160 pixels) resolution DreamColor display, which is layered with an anti-glare coating. The screen has 600 nits brightness and the ability to switch between different color spaces, between AdobeRGB, sRGB & DCI-P3 gamut. It will help the users maintain a definite color profile for all the work they do on this convertible.

The screen can reproduce 100% of Adobe RGB color gamut, which has a broader color palette than the standard and sRGB profiles. There’s an ambient light sensor that automatically tunes the display’s brightness based on the environment.

For creators and professionals, the ZBook Studio X360 has been optimized for editing, color grading, retouching, 3D modeling for software like Adobe Premiere Pro, Photoshop, Lightroom, XD, Autocad, Autodesk Sketchbook, SketchUp, Solid Edge, among others. Rest be assured, the Studio x360 will be able to handle as intense a workflow as you’ll throw at it.

Being a powerful workstation, the Studio x360 doesn’t miss out on HP’s privacy features like Sure View for guarding the screen against passers-by, Sure Start, which protects a user’s data and Sure Click for prevention against creeping malware.

The ZBook Studio x360 can deliver up to 16 hours of battery life on a single charge and supports HP Fast Charge for ultra-fast recharge times. HP claims the Studio x360 can be charged from 0% to 50% in just 45 minutes.

That’s not all; the ZBook convertible is tested under stressed workflow and against shock, altitude, extreme temperatures, and even drops. So, it doesn’t compromise on the durability department and has received the Military Standard certification.