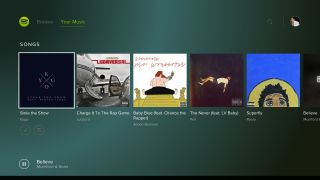 If you've been waiting for Spotify to make its way to Xbox One after its arrival on PS4 last year then it might be time to stop holding your breath.

A recent tweet from Spotify support, responding to a question, reads: "Hi! Right now we're focused on our exclusive partnership with PlayStation, we don't have any info regarding other consoles/BE".

The comment indicates that the world's biggest streaming service is going to remain exclusive to Sony's console for the foreseeable future.

Xbox One owners will have to settle for playing music that they already own via an update which is expected to arrive in August.

The ability to play background music was a feature of the Xbox 360 from its launch in 2005, and was actually absent from its rival, Sony's PlayStation 3, which didn't receive the ability until an update in 2008.

Given the 360's feature lead over the PS3 it was a shame to not see this maintained into the next generation, but hopefully with the upcoming update music lovers on Xbox will have some respite from the horrors of EA Trax.