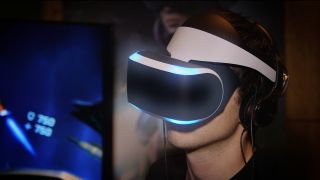 "Do these glasses suit me?"

It's not every day you get to spend the afternoon flying through space and cage diving with sharks, but it's all in a day's work for us folks here at TechRadar. Well, sort of. Said activities were in fact carried out under the close supervision of Sony as we took Project Morpheus for a spin.

Of course, we've already managed to bag a few minutes with Sony's VR darling at GDC 2014, but this was the first occasion we saw it running Eve Valkyrie, the first-person space shooter also destined for Oculus Rift.

Hugh Langley recently got to spend some time barrel-rolling though the cosmos and fending off sharks with a flare gun, and was happy to share his giddy excitement with us afterwards.

Although we did have to keep reminding him that none of it was real.