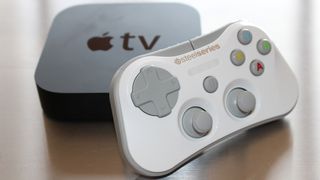 The biggest gaming story of this week was also the most unbelievable, involving Nintendo and its plans to recover from the disaster of the Wii U.

According to the rumour, the plan is to abandon it entirely and release a whole new console called the Nintendo Fusion (the same name that was given to Nintendo's rock music and gaming festival, which hasn't taken place since 2006).

The console, touted by an anonymous source, will supposedly come in two parts - "Fusion Terminal" and "Fusion DS".

The former would be the main console and the latter would be a portable device, but the point is that the two would be closely combined.

Our opinion? Nintendo replacing the Wii U this early would be mad enough, let alone replacing the 3DS, the most successful console of 2013. A bold, potentially radical strategy is needed right now, but we can't see that being one which screws over the people who have bought a Wii U.

Yup, the specs of this mythical Fusion console look meaty, and the birth of the 2DS reminded us that this company is capable of odd surprises. But we're not holding our breath on this one.

Why virtual reality is the exciting future of the PS4

How tech shapes the future of gaming: are we better, connected?

It's a saga, alright

Then King began hunting out games with 'candy' in the title and asking their developers to remove those games from the iOS App Store. However, after quite a bit of furore about the matter, King responded by saying that it won't come down on everyone using the word - just select cases.

But it didn't just stop at candy. King also targeted Kickstarter Viking game The Banner Saga, submitting a Notice of Opposition to the US Patent and Trademark Office, asking that studio Stoic be refused a trademark for the name 'The Banner Saga'.

Needless to say, Stoic wasn't happy about it. But King's response was that its actions were to merely note its opposition to the name rather than to actively get the Steam game removed.

Still, it's caused a lot of uproar in the gaming community, and we'll be interested to see how King chooses to go forward with its newfound powers.

Apple gets in the game

Apple has already got mobile gaming down, but when it comes to competing with the living room consoles its plans have remained as no more than rumours for years.

However this week we heard some interesting claims about the 2014 iteration of Apple TV. According to an anonymous tipster, the updated Apple TV will introduce a new Game Store.

On top of that, there's another rumour floating around that Apple is working on Bluetooth controllers for the set top box.

All in all, we're intrigued. But until these games can rival the titles of the Xbox One and PS4, will we opt for iOS titles on our TVs - or stick with our smartphones?

"Following the biggest launch in PlayStation history, join us for an introduction to the slimmest," reads an invitation sent to TechRadar this week.

No points for guessing that Sony is about to announce a European launch for the PS Vita Slim (Vita 2000). The thinner PS Vita was launched in Japan last year to the envy of just about all of us. It's 20% thinner than the current Vita and 15% lighter, and replaces the OLED screen for an LCD.

January 30 is the big day, and we suspect that a US (and hopefully Australia) release date will follow soon after...

We're feeling a bit light fingered this week, so check out our Thief final hands-on preview

Firing a broadside in the ongoing console war, is our games of 2014 Titanfall preview

Find out why LotR's Shadow of Mordor is Batman meets Assassin's Creed in the coolest way in our full preview.

We looked into our crystal ball and saw the future. Check out our 10 bold Microsoft gaming predictions for 2014.

The man behind the Wii U-exclusive Scram Kitty & His Buddy On Rails says that Nintendo are "tremendous to work with".

Donkey Kong Country: Tropical Freeze has had a rough ride online, so we sent our blogger to take on the YouTube flamers in Alex Jones vs. The Internet.