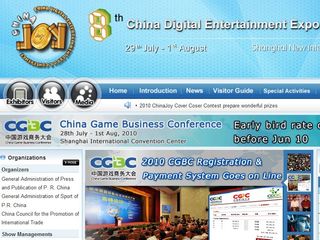 The 2010 China Digital Entertainment Expo and Conference (otherwise known as 'ChinaJoy'), taking place in Shanghai over the weekend, is China's biggest videogame trade exhibition, with over 200 exhibitors and an estimated 150,000 visitors.

ChinaJoy doesn't get the acres of coverage that western events such as E3 and GamesCom receive, primarily because it's obviously not targeting western gamers and consumers.

But what it does have is scantily-clad booth babes. And, much to the chagrin of both the Chinese government and western feminists, lots of them!

Reports from ChinaJoy in Shanghai note that the most visible aspect of the show are the hundreds of miniskirted models promoting various hardware and software brands.

One online security company was spotted employing 40 models in bikini shorts handing out small boxes in the style of condoms, containing locks to promote their product.

This is despite recent Chinese Government bans on online gaming companies from using sex to sell their wares.

"The most eye-catching part of the exhibition is the show girls," said Feng Gong, senior director for CBS-owned internet portal Zol.com.cn, who's company is sponsoring this year's Miss ChinaJoy pageant.

"The pretty girls and products complement each other and the combination is just perfect," Feng added.

Shanda Games' Marketing Director Jay Jiang said: "I've been to shows in Japan and Korea before, they don't have as many show girls.

"For foreign companies, it's more about exhibiting products. Often a senior executive will make a product presentation, but we invite players onstage to compete with the show girls."

"Some will ask for a particular pose, some ask me to touch them. Some are just perverts - they rush to the stage and harass us."