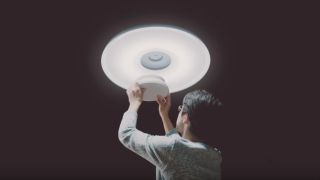 Sony has launched its latest smart appliance, and it's a smart light bulb that can do a lot more than you'd imagine a light source can do.

As with most other smart light bulbs, the Multifunctional Light, which was developed using Toshiba's LED lighting tech, can connect with your smartphone, allowing you to control timers and remotely turn it off and on.

But Sony has filled it with a whole bunch of sensors, including sensors for motion, humidity, luminance and temperature, as well as an infrared controller, speakers, a microphone and even a slot for a microSD card

It can turn on when you enter room, as well as play music or playback your home phone's answering machine.

But it does so much more: the Multifunctional Light can also work as an intercom between rooms, help control your thermostat and even connect to your home alarm system, all of which can be controlled via a smartphone whether you're at home or out and about.

Unfortunately, the Multifunctional Light will only see a release in Japan during the first half of this year, but we're holding out hope it will eventually make its way across to the rest of the world.

You can check it out in action below.