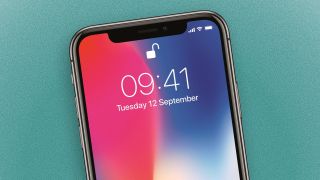 Two of the most divisive design features in today’s smartphones are disappearing: headphone jacks and increasingly common screen notches at the top of these new ‘all-screen’ phones.

The notch seems to be something people either hate or, well, just don’t care about – but we think there’s something slightly beautiful about a well-designed notch.

Don’t laugh. Notches allow the newest phones to look more 'all-screen' than any have before, and many phones give you the option to block off the notch if you miss the look of a conventional display rectangle.

But to celebrate this sometimes-maligned feature of today's phones, let’s take a look at how notches came into being, and how they've evolved.

Before the notch as we know it, there was the LG V10

Ask the average person which was the first phone to have a notch and they’ll probably tell you it was the iPhone X. Wrong! A couple of Android-based handsets got there first, including – depending on how you define a notch – the LG V10.

This phone doesn’t have a notch as we know it today, but it does have a second screen above the normal display, leaving a notch-like block above and to the left of the standard display for the selfie camera.

LG was able to use this separate panel as an always-on screen, to show the time and information like the weather, while when the phone was in use you’d use the notch as an app shortcut bar.

The LG V10 was announced in October 2015, two years before the iPhone X.

You could argue either way as to whether the LG V10 had a 'proper' notch or not, but the Essential Phone PH-1 definitely did – and it was announced in May 2017, six months before the iPhone X.

For a brief time it looked as though the Essential Phone might be the next OnePlus-like sensation in smartphone world, posing a real challenge to the established brands – but was ultimately a failure, and the follow-up to the PH-1 was cancelled.

Android co-founder Andy Rubin was the brains for Essential Products, the company behind the phone, so you’d have expected it to be a winner.

The Essential Phone PH-1 was a clean, stripped back Android handset with a tasteful, high-end design.

However, it lacked wireless charging, a headphone jack, expandable storage and water resistance, making it not quite compelling enough to catch on given the lack of brand power.

The iPhone X was the first Apple phone to have a notch – and it had a better excuse for needing the notch than most other cameras that sport one. An IR dot projector and IR depth-sensing camera sit in the black expanse, as well as the conventional front camera.

Many analysts predicted the iPhone X wouldn’t be a success, but it was. However, the standout feature of the phone was arguably not the addition of the notch, but rather the fact that it pushed the cost ceiling for flagship phones to $1,000 (£1,000, £1,579AU), paving the way for today's ultra-premium models.

By the time the LG G7 ThinQ arrived in May 2018, notches were already fairly common; however, LG also recognized that a lot of people weren't big fans of them.

LG offered a series of ways to hide the notch in the G7. As well as letting you block it out with a bar of black, you could use a monochrome or colorful gradient – this is a notch you can dress up rather than hiding, while still ending up with the impression of a more conventional screen shape. You can even choose whether to have curved notch edges or straight ones.

More people have learned to accept the notch since the arrival of the LG G7 ThinQ, and this is still perhaps the most customizable display notch to date.

Chinese brands largely unknown in the West didn't take long to climb aboard the notch bandwagon – Oukitel, Elephone and Cubot all make dirt-cheap phones with notches.

However, the Honor 8X is in the running for the title of best affordable phone of 2018 with a notch. It’s a quarter of the price of an iPhone XS Max, and it's by no means a completely stripped-back handset.

That notches would find their way onto more affordable phones wasn't surprising,  and it was also no surprise that Honor got there before the other big names, given that its parent company, Huawei, had already produced a couple of phones with notches – the P20 and P20 Pro.

Few notches have caused quite as much of a stir as the Pixel 3 XL’s. There’s nothing special functionality-wise about this screen cut-out – it’s just a lot thicker than most, with around an inch of space sliced out of the OLED panel.

Google didn't include an option to hide the notch either, so you’re stuck with the thing unless you design your own wallpaper to obscure it.

Google’s excuse for the notch is the 3 XL's front dual cameras – and, fair enough, they take some of the best selfies we've ever seen from a phone. But that massive notch is still enough to put some people off it completely.

What’s next for the notch?

To think about what’s next for notch design requires thinking about what a notch is actually for. It lets phone makers fill more of the front of their devices with display, while also fitting in components like selfie cameras, ambient light sensors and infrared face unlock arrays.

Those sensors either need to get smaller, to allow for a smaller notch, or be embedded into screens – or not be incorporated in the screen at all – to make the notch unnecessary.

Chinese smartphone brand Vivo has come up with a novel way of getting around the notch issue – the selfie camera on its Vivo Nex phone pops up from the top of the phone rather than being embedded in the display, and Oppo has followed suit with the Oppo Find X.

Elsewhere, a Samsung patent published in January 2018 detailed a phone with its sensors and camera as part of the screen. However, as this still seems to involve punching holes in the display you have to wonder whether it won’t be just as distracting as a notch, if not more so.

In 2019 you can expect notches to become slightly less deep, screens to push even further into the edges of a phone’s front, and perhaps more pop-up cameras – but the notch isn't going away anytime soon.