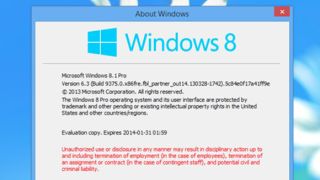 It's a sad day for colour fans as Microsoft has announced that its Windows 8 update codenamed Blue will, very boringly, be called Windows 8.1.

The news came by way of an announcement by Microsoft's chief financial officer for the Windows division, Tami Reller, during a conference call with J.P. Morgan, where plans for the upgraded operating system were discussed.

Of course, calling the update Windows 8.1 follows Microsoft's traditional conventions and the decision should avoid people thinking this is a whole new Windows platform.

All was forgiven as soon as another four letter word popped up – free. Yes, Microsoft confirmed that the update will come with no charge to Windows 8 computers.

Reller also stated that the update will arrive later this year - which we already knew, but it's always nice to hear it again.

Windows 8.1 is expected to address the biggest concerns users had with the Windows 8 Metro interface and will be available from the Windows start screen when it arrives, Reller said.

Meanwhile, a preview version of 8.1 will be released at Microsoft Build in June.

We've taken everything we've heard about Windows 8.1 and squeezed it into one manageable video, just for you. Check it out: