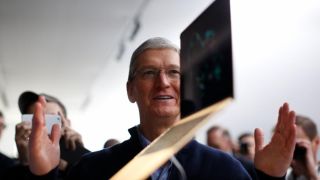 Any Mac, in its current form, is a thing to behold: a sleek, durable piece of aluminium and silicon that, when compared to other PCs, stands out from the crowd by a considerable distance. All of the MacBook lines – comprised of the Air, the Pro, and the standard MacBook – are thin, light, and crafted with an obvious eye for detail.

The Mac mini, the cheapest computer Apple sells, is beautifully tiny, while the iMac has a presence that can be genuinely felt, thanks to a distinctive design that has adorned the desks of almost every film set ever. The Mac Pro, the company's highly expensive desktop, is really the icing on the cake.

However, Apple's main business – the iPhone – is vastly more profitable than the Mac, which brings in around $5 billion (around £3.4 billion, AU$7 billion), in revenue per quarter. In fact, when the two are compared the Mac pales in comparison, fading away behind quarterly sales of over 50 million iPhones and a staggering amount of revenue.

So why does Apple, a company driven by profit, continue to manufacture a product that is less successful, less high-volume, and harder to make than the iPhone?

Halo, can you hear me?

The simple reason is this: The Mac is a "halo" product. What this means, essentially, is that the Mac creates an image under which all other Apple products - from the TV, to the iPad, to the iPhone - are viewed. This is, in part, down to the fact that Apple was, originally, a computer company.

The very first product Steve Jobs and Steve Wozniack created, from their garage, was a desktop computer. PCs, in various forms, run in Apple's DNA and are omnipresent in everything Apple does, even today.

The second reason, which is tied into the first, is that because Apple has been making the Mac for so long it has become well known and, as such, defines Apple as a brand and as a company.

Everyone in the Western world, where Apple makes the majority of its profits, would recognise - or at least know of - a "Mac." This name recognition is part of the reason the iPhone is so successful: It builds on the shoulders of giants that shaped an era of computers and, astonishingly, continue to do so today.

While the iPhone was never Mac-only like the iPod, it has close links to the Mac both in terms of software - iOS is based off OS X - and hardware. All of the iPhone's applications are built to look like their Mac counterparts, for example, and the sleek, metallic design of the later iPhones - i.e. the iPhones that went on to sell in the tens of millions - harks back to the MacBook, especially the later models.

The product signally that the Mac infers - wealth, status, power - is driven by Apple's reluctance to race to the bottom in terms of pricing, a decision that every other PC maker - from Lenovo to Dell to HP to Toshiba - is now regretting.

PC shipments, both in the West and globally, are falling thanks, almost entirely, to the smartphone. The only company that isn't seeing a negative trend for its computers is Apple. So why is that?

The answer is simple: The Mac is so well known, has spawned another well known product, and continually strives to be the best computer - desktop or laptop - available today. In essence, the Mac is as premium as they come - and this defines the Apple brand.

Reviewers often rate Apple's laptops and desktops as best in class, spurred on by a winning combination of hardware and software. In some key ways - like the trackpad and battery life - MacBooks cannot be touched. The high scores these devices attract, in turn, are reflected onto the iPhone.

Steve Jobs, the father of the Mac, insisted that everything about the computer was perfect including, famously, the circuit boards inside the casing which, most likely, were never going to be seen by the owner. This obsessive attention to detail, driven by Jobs, persists today and is why Macs continue to be best-in-class in at least a few areas.

Where Apple falls short, its low-resolution MacBook Air displays being one example, it prefers to take its time before releasing an updated model to get it right. As its 21.5-inch 4K and 27-inch 5K iMacs show, it's often worth the wait. On the other hand, it has taken Apple so long to update its MacBook Air line that it could be argued the next wave of MacBooks needs to be revolutionary.

Tim Cook, the successor to Steve Jobs who currently presides over the company, told Charlie Rose of "60 Minutes" in an interview that all of Apple's products could be laid on a single table and this, Cook said, was what made Apple so special: A laser focus on just a few, carefully selected things.

So, with that in mind, it would seem that the Mac is far beyond just a relic from the past and is being kept on by Apple for something.

That something is this: To build up the Apple brand and recognition for the iPhone and, more broadly, the iPad, elevating the cheaper models - such as the upcoming iPhone 5se, which is rumoured to be a low-cost model - to the plane of other Apple products, like the $2,499 iMac or $3,199 MacBook Pro.

It may seem strange to declare a range of computers that sells around 5 million per quarter as the backbone of the iPhone - which sold 74 million in one quarter last year - but the design ethos, brand recognition, and ideas come from the Mac.

The quality associated with the Apple brand also comes from the Mac, thanks to the attention to detail that stems from Jobs that, in turn, translated into consumer trust.

In fact, the loyal following who originally bought the Mac - predominantly creatives and developers - were the first people who bought the iPhone and, more importantly, the people who persuaded their friends, parents, grandparents, and siblings to buy one.

The first 10 million units were, without a doubt, down to Mac users buying one and recommending it, probably because the apps - such as Mail or Safari - looked like the ones that OS X had.

Apple continues to service these users - which could be described as "power" users - with the Mac, adding another reason to keep the line going. When the Mac Pro, the high-end desktop model, was left un-updated for a number of years, users revolted and Apple had to quickly update the desktop.

The new model, which has a cylindrical design, is a thing to behold and, in a way, describes why the Mac is here to stay: Fitting a whole desktop into a tiny cylinder is hard, but Apple did it anyway.

It is this idea - that difficulty leads to perfection - that gave way to the iPhone, iPod, iPad and, originally, Mac and continues to guide Apple to this very day.