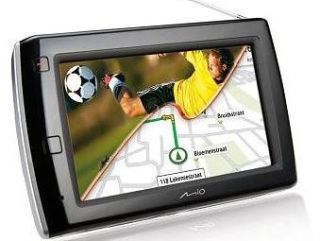 Mio has launched its latest TV-capable sat nav this week, with the Spirit V575 set to appeal to long-distance drivers and families looking for mobile entertainment on long drives and weekends away.

The Mio Spirit V575 comes equipped with IQ Routes technology, a navigation and mapping service to keep you informed of traffic congestion and any road problems that might occur on route.

The new Mio sat nav also doubles up as a touchscreen-controlled TV tuner, featuring a seven-day EPG to let you access hundreds of channels across Europe – ideal for bored lorry drivers and lonely salespeople out on the road.

The new Mio Sprit V575 also pack in a multimedia player so the kids can be kept nicely docile in the back of the car watching movies or listening to MP3s.

"Because of this, we wanted to expand the range, while still keeping in line with Mio's philosophy of providing customers with cutting edge innovation in navigation. The V575 encompasses all this and provides more entertainment than ever before."

If watching Freeview TV on the go is something that appeals, then you can get all the details on where to buy the new TV-friendly sat nav over at Mio.com (RRP in the UK is £149.99).

In terms of the unit's navigation tech, Mio's press release informs us that you also get "3D Junction Views for clear guidance at complex junctions, safety camera warnings, Text-to-Speech technology for spoken street names and Mio's QuickSpell keyboard, which intuitively suggests words as the user types".